Is Firefox hogging RAM? Memory Restart can fix that 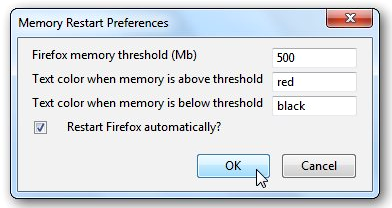 When Mozilla released Firefox 4 (and now Firefox 5), it appeared to have finally fixed some of the performance-related gripes of earlier releases. Compared to Firefox 3.6, Firefox 5 is lightning fast, but sadly behind the scenes all is not as it should be. Firefox still suffers from a memory leak that sees its memory demands slowly spiral over an extended period of time, stealing precious system resources and affecting your PC's performance as a result.

A simple restart fixes the problem, but it's still annoying. The good news is that Mozilla developers are targeting this memory leak and think they may have found a way to fix it. If we're lucky, the fix may even make it into Firefox 7, which is due to be released as Firefox Aurora imminently. In the meantime, how you can stop Firefox's increasing memory demands from spiralling out of control? The answer lies with a tiny add-on appropriately titled Memory Restart.

Memory Restart does two things: first, it displays Firefox's current memory consumption in the Add-ons Bar. This immediately reveals how Firefox's memory demands increase over time, regardless of how it's being used. When Firefox's memory consumption hits 500MB, the text will change to red to warn you that it's in danger of overrunning the rest of your system, telling you it's time to shut down and restart Firefox to free up most of the memory it's snaffled.

Memory Restart's other trick is that you can configure it from its Options dialog to automatically restart Firefox when the 500MB threshold is reached, preserving all your open tabs and allowing you to continue browsing without too much hassle. Better still, the arbitrary 500MB figure can be altered to any amount you like, allowing you to tweak Memory Restart according to the amount of installed RAM in your computer.

It's not all plain sailing, though: compare Memory Restart's figure with the Windows Task Manager and you'll discover it reports less memory is being consumed than Windows believes. One solution to this problem is to lower the threshold accordingly, say by 50MB.

Memory Restart for Firefox is available now for Windows, Mac and Linux, and works with Firefox 3.6 or later, including the latest stable release, Firefox 5.

24 Responses to Is Firefox hogging RAM? Memory Restart can fix that