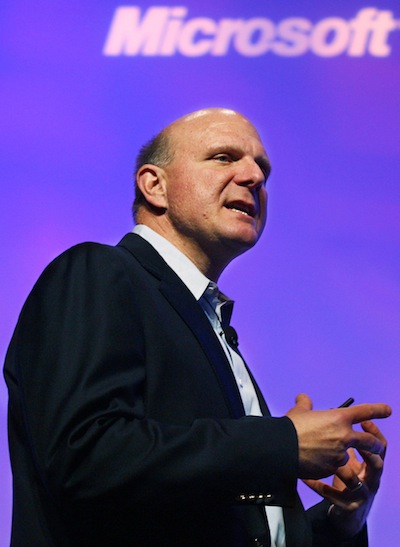 Sometimes I really can't figure out Microsoft. Does the left-side corporate brain not connect to the right?

Take this new business in Microsoft patents supposedly applied to Android. HTC already coughs up five bucks per handset in licensing fees and scuttlebutt is Microsoft wants $10-$15 per phone from Samsung. Had the Supreme Court sided with Microsoft in last month's i4i ruling, Samsung and other Android licensees could quite possibly have invalidated the patents in court -- putting an end to Microsoft's lucrative Android patent payment business.

Right now the standard for invalidating patents is pretty high, using what's called a "clear and convincing" standard, which Microsoft wanted to be "preponderance of the evidence" instead. Had the Supreme Court ruled in Microsoft's favor, the standard for invalidating a patent would be lower. That's great when Microsoft is looking to invalidate a patent -- tougher when it's the patent holder being challenged -- as could have been the case regarding patents the company claims apply to Android. Emphasis is on claims, since the violations are all Microsoft's say-so; they've not been vetted in the courts.

Why Invent When You can Sue?

For a company long the victim of patent trolls it's interesting to see Microsoft do a little trolling itself -- and not with competitors. HTC and Samsung were loyal Windows Mobile partners long before they shipped even one Android phone. Is it their fault that after a heavy half-decade of binge drinking Windows Mobile marketing share, Microsoft fell asleep at the wheel, crashed and burned? They moved on to Android but never abandoned Microsoft. Both companies ship Windows Phone 7 handsets today. But the big bucks come from Android handset sales.

How funny that Google doesn't charge a licensing fee for Android, but Microsoft effectively does through intellectual property licensing fees. It reminds me of the 1990s, when Microsoft compelled OEMs to pay a Windows licensing fee for every PC regardless of the operating system. Compaq or Dell could sell any other OS, but Microsoft would still get paid for Windows. Microsoft applied leverage that drew ire of US trustbusters that led to a 1995 settlement. Back then, Microsoft used the threat of withholding DOS/Windows as stick to get those contracts, compelling OEM partners -- not competitors but partners -- to pay up for every PC.

If the rumor mill of uncredited sources and Wall Street analyst speculators is believed, Microsoft bilks partners for less based on their commitment to Windows Phone. An Android OEM better supporting mobile OS gets Microsoft's reduced patent licensing option. If true, then the company is dipping dough from two barrels -- licensing fees collected for Windows Phone and patent licensing fees collected for Android, all from the same handset manufacturers.

The numbers here are dizzying. IDC claims that Android and Windows Phone will be the first- and second-ranked smartphone operating systems in 2015, with 43.8 percent and 20.3 percent market share, respectively, based on unit shipments. The firm also predicts that 1 billion smartphones will ship that year, which makes for easy math -- Microsoft collecting some kind of licensing fee on as many as 641 million smartphones.

Let's assume, for the sake of simple calculations, that Microsoft collects only $10 a license. That works out to a cool $6.4 billion in licensing fees a year by 2015. I believe the $10 estimate is a low, but workable figure since it's unclear how many of the nearly 40 Android licensees will pony up and the figure doesn't include tablets, which Microsoft could collect on, too.

Yesterday, over at GigaOm, Ryan Kim asked: "Can Android be Microsoft's next $1 billion business?" Kim writes: "Microsoft could make $912 million in a year if it extracts $5 per activation on every Android smartphone or tablet sold" -- that's based on the current 500,000 Android activations a year.

Oh My -- What Innovation!

But the number also assumes that every Android licensee pays up. Barnes & Noble and Motorola are resisting, and B&N and Microsoft are already embroiled in a patent dispute. Microsoft filed a lawsuit in March, regarding B&N's Nook. The filing identifies the shocking patents Microsoft claims that Android violates. Among them:

I often wondered what Microsoft spent those billions and billions of research and development dollars on. What amazing technological advances these patents demonstrate. I should be so lucky to patent the "hand movement from hip to mouth to cough". Hell, I could be a billionaire collecting just a dollar licensing fee from every human on the planet. Surely these amazing Microsoft patents are no more complex.

I had assumed Microsoft patents actually covered something invented. But processes?

Now Microsoft has its grubby little hands on a stash of Nortel patents. The company's troll attorneys must think it's Christmas!

Mmmm. Microsoft CEO Steve Ballmer is quick to tout how his company advances innovation. Someone else could argue that Microsoft uses presumed intellectual property rights as a club to stifle innovation -- to pressure companies afraid of the software giant and its attorneys to pay ongoing license fees for untested patents over processes.

In it's Supreme Court case, Microsoft argued that the patent system needs reform. When it comes to software and some of the simple, obvious processes for which companies like Microsoft receive patents, I must agree.

32 Responses to Patent trolling with Microsoft