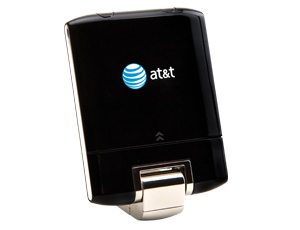 AT&T introduced two LTE devices on Tuesday, while at the same time saying it was on track to roll out the next generation cellular technology in five markets later this summer. Hidden in the details is the that fact the new devices also support T-Mobile's frequency bands, showing confidence in the proposed merger.

The AT&T USBConnect Momentum 4G is the carrier's first LTE dongle which will also support access to AT&T's entire national Wi-Fi network. The AT&T Mobile Hotspot Elevate 4G will be an LTE-enabled hotspot allowing for the connection of up to five devices simultaneously with the carrier's cellular network.

AT&T had said earlier that it will use T-Mobile's AWS spectrum to assist in a broader rollout of LTE across the country. While the merger has seen a great deal of pushback -- especially from Sprint -- the carrier seems quite confident it can get approval and apparently will begin adding T-Mobile's frequency bands into its next generation products.

LTE will be available first in the Atlanta, Chicago, Dallas, Houston, and San Antonio markets later this summer, with at least another ten markets to be added by the end of the year. With approval of the T-Mobile merger not likely until well into 2012, it's unlikely that additional spectrum will affect the LTE rollout for at least another year if not more.

Why no phones yet? The answer's probably pretty simple: early adopters are traditionally data users vis a vis phone users. The rollout of data-only devices also puts less stress on the network which in turn will allow AT&T to work the bugs out before a wider rollout to its customer base at large.