Mac OS X Lion is here, and I don't like it 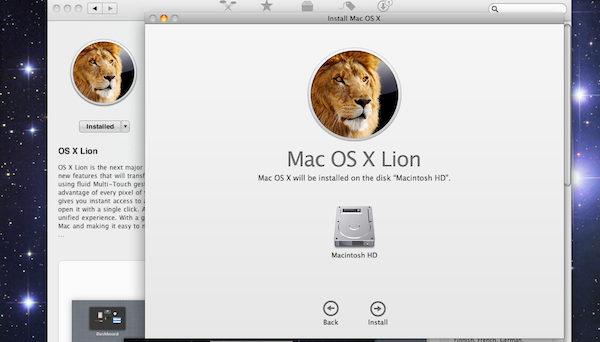 As announced late yesterday during Apple's fiscal 2011 third quarter earnings call. OS X 10.7 released today. It's yours for 30 bucks, if your Mac has Snow Leopard and Mac App Store installed. Otherwise, you're buying something more first, either OS X 10.6 or a new Mac.

Concurrent with Lion's release, Apple also updated MacBook Air with Intel Sandy bridge processors and Thunderbolt ports. Lion ships on all new Macs from today. Lion requires a Mac with OS X 10.6.8 to install and a Core 2 duo processor or later. If your Mac is Core duo, you're out of luck.

Never have I experienced a major operating system update as easy as this -- on a personal computer, anyway. I went to Mac App Store, stopped at the Lion page and clicked purchase. The software downloaded, prompted for password to install and did its thing (meanwhile I took a short shower). Lion was ready when I returned. It might have taken longer for Apple Mail to upgrade content and accounts than for Lion to install. I'll offer a full review later, but for now my initial first impressions are negative.

Apple imposes fundamental usability changes with regards to the user interface that you'll either like or despise. I started out writing a simple news story about Lion's release but lost so much time writing -- thanks to all these changes -- that my post is late and its content changed. This is the first OS X upgrade ever for which my first impressions are negative rather than glowingly positive.

New mail may shock you, likely. Frequent users of Apple Mail via MobileMe will find the interface mostly familiar. Others will be surprised at how different is the user interface. Don't worry, you can return to the old familiar motif -- and some people might want to. It's a matter of whether you're a "sink or swim" personality or someone who goes a toe at a time.

Other changes are subtle at first. Lion has a new auto-save feature that looks handy, but will require some people (me among them) to adapt behavior. For apps supporting Lion's new auto-save feature there no longer is a "save as" option. Apple has replaced it with "save a version", while some applications, like Pages, offer "save" but no longer "save as". However the "duplicate" option has been moved to the File menu where it can replace "save as".

There are plenty of other tweaks and features that require users to change their habits. For the rest of this post, I'll focus on one and put it in broader context.

Most of the usability changes are philosophical and support an Apple worldview about computers and mobile devices: The company is driving users to full-screen apps and trying to mimic the touchscreen experience of iOS devices. From that perspective, Lion radically differs from all other modern operating systems, with exception of Chrome OS, which only functions in full-screen mode. There is no desktop with Chrome OS. The two objectives are intertwined with respect to certain decisions Apple has made regarding how some very basic UI elements function differently. To that end, Apple takes something away: The scrollbar.

Well, the scrollbar isn't gone completely, it's just no longer persistent. It disappears. If the scrollbar reappeared when I moved my cursor -- say, across the screen  -- I wouldn't have stumbled so badly over the UI changes. You may, too. What Apple wants you to do is change behavior: Scroll two fingers across trackpad or an Apple touch mouse to make the scrollbar appear.

Betanews founder Nate Mook and I got into a debate about this behavior. He likes the screen real estate gained by removing the scrollbar and sees the touch behavior as similar to iPhone, where there is no scrollbar. I disagree. On the iPhone I'm touching the display. It's a very different user experience, because the interaction is directly with the content. Here, I must look down and away to use the touchpad -- well, until there is muscle memory, I guess. Your eye is on the screen with iPhone -- or iPad or iPod touch.

"I haven't touched a scrollbar probably since 2006", Nate says. "You're just an old man". He's sadly right about that. "Kids these days mostly use iOS, so this is a smart approach, I think. Kids will be more familiar with iOS than OS X".

Anyone with a Mac laptop with trackpad that supports touch gestures -- and has been using them -- shouldn't have quite the trouble I did this morning. (Well, if they can get used to reverse scrolling, which lest I'm mistaken is new with Lion.) They'll be accustomed to two-finger scrolling, which brings back the scrollbar. But that's not everyone, and there are plenty of iMac users who either don't have Apple's touch mouse or don't use the touch features. By the way, the scrollbar is diminutive compared to previous Mac OS X versions, which is another reason to question hiding it. The scrollbar looks pretty much like it does on iOS 4.x.

That brings me to full-screen mode, which is another reason for Apple doing away with the scrollbar. On iOS devices, there is only full-screen mode. Users never see the desktop unless they exit an app. But unlike iOS, users can slide fingers across the trackpad to move between full-screen apps, which definitely is handy. Again, this somewhat comes back to Nate's point about iOS familiarity and better unifying the user experience across devices. Maybe, but Apple also is asking Mac OS X users who might not have an iOS device -- surely that is many -- to change their behavior. I'll adapt, after cooling down from my initial reaction.

But I'll rightly grumble, while observing something else. Apple's approach here has yet another philosophical element worth observing. The modern Internet is about the browser and consuming content and services there -- and the latter includes applications. Apple doesn't want people using browsers, even though it offers a pretty good one. Applications sustain the iOS and Mac OS X ecosystems. As I explained in April 2010 post "Clash of the titans: Apple, Google battle for the mobile Web", Apple and Google have clashing worldviews where for the one applications matter more and for the other the browser does: "Apple and Google mobile device worldviews differ in two fundamental ways: Closed/tightly controlled versus more open/loosely controled and applications versus browser centricity".

The hidden-scrollbar subtlety supports the application-centric approach, particularly in full-screen mode. The scrollbar is fundamental to browser functionality. It's a longstanding motif that supports how most websites present content. People reading content will find much of it below the fold. Many applications don't need scrollbars. Lion is more like one giant app, with respect to fundamental UI attributes. Where Microsoft incorporated Internet Explorer into Windows and Google made Chrome OS core operating system, Apple has fundamentally backed away from the browser motif as part of Lion's main presentation.

Perhaps my biggest surprise this morning came from switching to full-screen mode and getting stuck. I use Google Chrome and not Apple Safari. I got into full-screen mode but couldn't get out. The exit button doesn't appear in the upper right-hand corner and the escape key does nothing. So I tried some other third-party apps -- Firefox and Skype, among them -- in full-screen mode, but they don't support it at all. I guess that's better than getting locked into full-screen. Hey, but I did have persistent scrollbars in Chrome while writing this post. Well, what ya know.

72 Responses to Mac OS X Lion is here, and I don't like it