Who are these people watching Hulu on Apple or Google TV boxes? 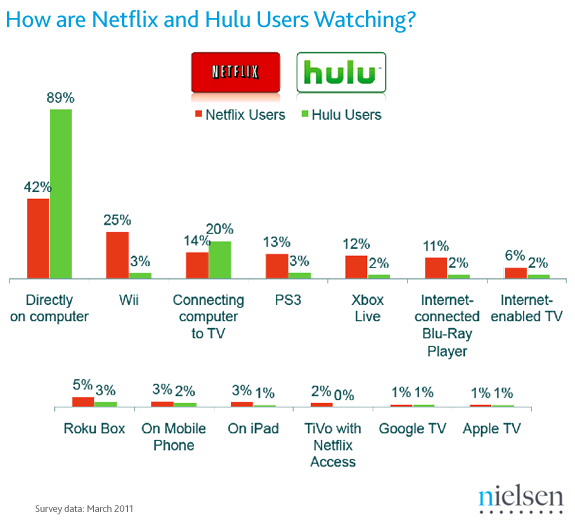 Nielsen has a new study out looking at how Americans use Hulu and Netflix. What I found surprising -- 1 percent of the 12,000 respondents say they use Apple TV or Google TV to watch Hulu. The service isn't supported on either device, last time I checked. So who are these people?

Well, they could be bleeding edge consumers who have hacked the boxes. But I expect for the most part it's erroneous reporting. People don't always know what to answer or what they've got.

Something else: Only 1 percent of Netflix users use Apple TV or Google TV. I can believe Google TV, because the number of owners is presumably quite smaller. But Apple TV low usage is surprising considering that the experience is quite good on the device.

Note on these statistics: They're not exclusive, meaning people might watch Netflix on their PC and console, too. Regarding PCs, that's what 89 percent of Hulu users use -- 42 percent of Netflixers.

What do you watch and where?

13 Responses to Who are these people watching Hulu on Apple or Google TV boxes?