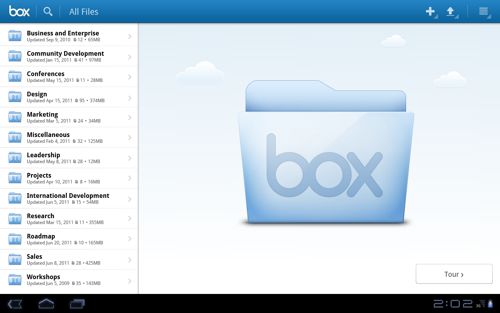 Web-based file storage and content sharing service Box.net on Thursday unveiled three new apps for the tablet world: one for Android Honeycomb, one for BlackBerry PlayBook, and one for HTML5-compatible browsers. These new products bring Box to essentially all mobile platforms in some way and round out its app offerings which already included iOS, Android, and WebOS.

Like Amazon has done with its Kindle e-book platform, Box is attempting to attain what it calls "mobile ubiquity," or a meaningful presence on any mobile device that comes along, irrespective of platform.

Box's approach to reaching this goal appears to have been similar to other companies as well: Start by releasing an iOS app, and work your way down in mobile market share until you get to Windows Phone. Of course, there is no Windows Phone Box app yet, but the screenshots Box uses for its HTML5 app all show it running on Windows Phones, so that appears to be the answer.

But really, launching an HTML5-based version of a service is a huge industry trend right now. In the last month alone, Pandora, Twitter, Amazon, and Vudu have all launched new HTML5 versions of their services, and Facebook is expected to follow suit soon.

"We have all these native apps that we see our customers need, but we're also trying to support, with really high fidelity all of the devices that we don't have any native apps for," Michael Smith, product manager for Mobile at Box said yesterday. "The best way to do that is the mobile Web, so we have added a bunch of new features using HTML5 on m.box.net, you can upload content within your phone browser, and we've added collaboration features like commenting on files and folders from the website, and a really fast full-text search for enterprise users on their mobile devices."

"There are two real reasons we decided to go with HTML5," Smith said. "First is that it fills in the gaps for all the platforms we haven't built native applications for yet, or ones that we're not going to build apps for. The other reason is that we want to make sure people coming to Box for the first time will have an experience as good as the app without having to actually download anything. You know, we send a lot of e-mail updates, and sometimes it's just easier to direct users to our mobile site to do a quick action instead of making them launch a native application. The usage cases for a mobile site are going to be different, and we see a lot of traffic coming from iOS, Android, and RIM devices on our mobile website."

The new Honeycomb and PlayBook apps will be available today in their respective app stores.

3 Responses to Box hits tablets from all sides with Honeycomb, PlayBook, HTML5 apps