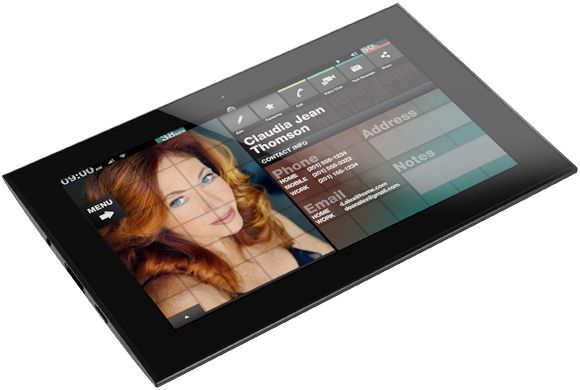 Several months ago, a mysterious tablet by a mysterious company began showing up in a campaign called "Who is TabCo?" which included fake focus group videos, a video that poked fun at Apple engineer Gray Powell who lost his iPhone 4 prototype at a bar last year, and a sky writer at Apple's WWDC conference. The videos purportedly advertised a new tablet, but said nothing about the device or the company that made it.

As at turns out, "TabCo" is Fusion Garage, the company responsible for the fiasco that began as the CrunchPad and ended as the JooJoo, a tablet which reportedly only 90 people had ordered before it began its end-of-life.

Following that ordeal and this reinvention, Fusion Garage has debuted three new products: GridOS, a smartphone called Grid 4 and a tablet called Grid 10.

GridOS is built on the Android Kernel and supports Android apps, but has been designed to be aesthetically very different from Android. A major part of this is the elimination of the four mandatory Android buttons, and the introduction of a button-free "wheel-based" UI, which grows a tree of menus out of points of contact on the screen.

"Grid4 has one smart interface. It anticipates your needs for actions and information and offers them up to you intelligently. Restaurant recommendations? Driving directions? Addresses? Grid4's UI delivers. Smarts are one thing. Heart is another. Grid4 has both. The phone's Heartbeat feature keeps you in touch with the pulsating world around you," the company's site says.

The Grid 10 comes in two variations, a 16GB Wi-Fi only model for $499 and one with 3G for $599, will begin shipping on September 15, and will only be available in the U.S. The Grid 4 smartphone appears to not yet be available.