What the passing of Steve Jobs says about us 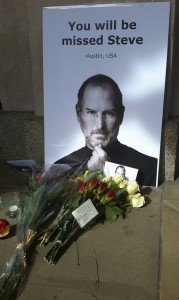 "Suit the action to the word, the word to the action, with this special observance, that you o'erstep not the modesty of nature: for any thing so o'erdone is from the purpose of playing, whose end, both at the first and now, was and is, to hold as 'twere the mirror up to nature: to show virtue her feature, scorn her own image, and the very age and body of the time his form and pressure". -- Hamlet Act 3, scene 2, 17–24

One thing that struck me about the passing of Steve Jobs is the level of emotion so many people feel. The outpouring of support and genuine sense of loss for a person that most people never met reminds me a bit of when Princess Diana died tragically. The emotion expressed over Diana’s passing was easy for me to understand. Diana was a state sanctioned celebrity, a real life embodiment of the fairy tales those in Western society grow up on. That coupled with her beauty and grace and life touched by scandal made it understandable why people would feel some kind of personal connection to her. The heroine from their fairy tales had been tragically taken away.

Steve Jobs’ appeal is harder for me to grasp. Yes, there is Thomas Edison-like inventor myth coupled with a phoenix rising from the ashes story. But Apple's cofounder can also be seen as representing what many people dislike: a member of the 1 percent, a multi-billionaire, a corporate exploiter of foreign labor, an enabler of consumer elitism and a cult-like leader whose flock cheerlead record corporate profits while viciously attacking any who dare speak out against Apple, Inc.

I find it sharply ironic that many of the same people occupying Wall Street today are simultaneously mourning the loss of one of the upper 1 percent’s most elite. But I also know that the appeal of Steve Jobs and Apple was never about supporting a corporation, it was -- and continues to be -- about participating in an emotional experience.

In reading many postings on Google+ and Facebook about Jobs’ passing, one theme jumps out at me. Many lamenting the loss of Jobs thank him for the devices they hold in their hands every day. They talk about these devices, iPods, iPhones, iPads -- as having changed their lives for the better. Even last night I found myself, who is by no means an Apple fan, looking sadly at my dusty, old iPod. In a way, that small, sleek bit of industrial design brilliance made me think I was looking at a piece of Mr. Jobs himself, so closely was his vision articulated with his products. I can only imagine how the true Apple fan feels as he looks into the refined brilliance of his iPhone and thinks about the man behind its invention.

Here is where I realize Jobs’ genius and why I truly don’t get certain Apple fans. For these people, it is about holding a little bit of Jobs’ vision in their hands. It’s about being a part of something unique, special, dare I say, magical. It is more than a phone, it is an experience, the Steve Jobs experience, and it is why they are feeling the loss so acutely.

When I look at my HTC G2 smartphone, I look at one of the most wonderful digital tools I have ever owned. I love what I can do with it. I love having a physical keyboard I can type on. I love having all my information in my pocket all the time. But what I don’t love is HTC. Not because I have a problem with the phone, but because I could care less about the corporation. I don't know who HTC’s CEO is, either, and I certainly don't love him. Perhaps he's a really nice guy, but I don't know him. If he passed me on the street tomorrow, I wouldn’t feel any different than I would for any other person that I never knew. Even if Andy Rubin, the inventor of Android, the OS I use on my phone every day, passed away, I would certainly not feel like a piece of me was lost as well. I would admire him for what he did and move on with my life.

The difference between the two experiences is stark. But it makes sense because the G2 is a tool to me, something I own and control and make work for my needs. The iPhone, for many, is an experience created for them to participate in, a vision of a great leader put into physical form right in the palms of their hands. I understand why Apple doesn't want people to customize their phones. Customization makes it about the consumer, while standardization makes it about the phone, the company and, ultimately, Steve Jobs.

There is a promise of something better, or being better by association -- it's aspirational -- and so the customer keeps coming back for more of that experience. In this way, the Apple fans that never met Jobs yet are unwavering in their loyalty and weep openly at his loss are really his supreme triumph. They are the greatest in his long list of creations: the iFan. They are also some of the purest examples of consumerism in that what they consume is a part of who they are. Their mythical hero is not out of the fairy tales from childhood but rather out of the richest tech corporation on Earth, a multi-billion dollar behemoth whose riches were gained in large part from the iFans’ wallets. It is the ultimate positive feedback loop for Apple, and the truest example of Jobs’ marketing genius.

While this triumphant convergence of marketing and commercialism is admirable from the standpoint of big business, it disturbs from the standpoint of an everyday American citizen. Thousands occupy Wall Street right now to protest the societal injustice of funneling the majority of the country’s wealth into the pockets of the few. Social services, education and health care for our citizens get cut while corporate profits grow. It is time for something to indeed change as we now have it worse off than the generation before us and, if we’re not careful, our children will have it worse off than us. The time is right to Occupy Wall Street.

Yet I think many of these same people doing the occupying should also think about occupying Cupertino, or at least lumping Apple in with the corporate fat cats that they rail against. Apple is no different and any emotional feelings of exception for Apple are the products of the system that they protest. The iPhone isn't an experience, it is a machine, a cold, hard machine built of silicon, metal and glass. The iPad isn’t magical, it is a tool, no better at its core than other tools that share the same form factor and function.

Yet by giving these devices our emotion, we are perpetuating the system of the 1 percent. The only thing we should give an iPhone, G2, or Toyota Prius is our skepticism and fickle approval or disapproval based on the offering at hand. Otherwise, we willingly let ourselves become cogs in the machine that perpetrates our subjugation.

I think the passing of Steve Jobs tells us as much about ourselves as it does about the man. Certainly I would call Microsoft cofounder Bill Gates a visionary of the same caliber and an even more accomplished humanitarian due to his philanthropic efforts of late. Yet I doubt if he passed away today there would be bagpipers in Redmond. Gates never went for the same emotional connection with the consumers he made billions off of; it wasn’t in his business model or skill set. On the other hand, consumer emotional connection was very much in the Jobsian-Apple model, as is evidenced in the outpouring of emotion with his passing. Yet underlying both approaches is the same ultimate goal: maximizing shareholder profit.

I would like to argue, in the spirit of Occupy Wall Street and as a plea for a rethinking of our American consumerist culture, that the iFans say goodbye to their unwavering emotional and financial allegiance to Apple as they bid farewell to Mr. Jobs. By all means, continue to buy Apple products, but also demand better from the company before doing so. Be critical and willing to buy something else if it’s better. Self-identifying with a corporation’s bottom line is the seed of our own demise as a healthy, socioeconomically diverse society. Demand Apple do better with labor practices in China. Demand this of every company you purchase products from. This is making consumerism work for us, rather than allowing ourselves to be worked by consumerism. In being critical consumers, Apple gets better, competitors get better and we get better served.

Fairy tales are not the products of corporations, even if they make the movies about them. Let’s thank Steve Jobs for his life’s work and move on with our own. Let’s think critically about the products we consume and the companies that make them. Most importantly, let’s teach our kids that the protagonists of our cultural myths aren’t publicly traded but rather individually owned by each child that hears the story of the lone hero and is inspired to be one herself. That, in many ways, is the real moral of the Steve Jobs story.