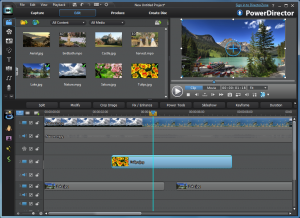 If you’ve ever tried CyberLink’s PowerDirector then you’ll know it’s one of the fastest and most feature-packed consumer video editors around. So you may not be surprised to learn that PowerDirector 10, released today, carries on this proud tradition by adding plenty of essential new functionality, and some very worthwhile speedups.

The program is now a very capable video editor, for instance. PowerDirector 10 can open many native 3D videos (MVC, dual stream AVI, side-by-side, over-under) and some 3D image formats (MPO, JPS); or, if you don’t have any of these, then you can always convert 2D videos and photos to 3D with CyberLink’s TrueTheater 3D.  These can be then be enhanced with many 3D effects, titles and menu templates, and once you’re done may be exported as 3D videos (including the anaglyph format, so anyone with a pair of standard 3D glasses can view them).

One of the most interesting 2D additions is the new support for third-party video effect plugins. Right now the only company supporting this is NewBlue, but they’ve provided 10 bundled "art effects" with the program ("air brush", "colorize", "hand drawn", "pastel" and so on). And in time you’ll be able to extend PowerDirector’s capabilities by downloading more, although CyberLink say this isn’t possible just yet.

Of course you get some native new effects, too. If you’re interested in time-lapse photography then a new time-lapse tool will assist in bringing your work to cinematic life -- and PowerDirector 10 can now record hand-drawn animations, and overlay them on your video: you might use this to draw an arrow, highlighting something of interest, say; or viewers could watch as your signature gradually appears at the end of a movie.

Other highlights include some smart new audio tools. The Beat Marker is able to analyze your movie soundtrack, for instance, and highlight notable beat changes on your timeline, making it much easier to synchronize transitions and effects with the music. And there’s no need to worry about differing audio levels on your clips, any more -- PowerDirector 10 can now normalize every audio file on a specific timeline track with a single click.

Once you’ve finished, you can author DVDs or Blu-ray discs, or upload your masterpiece directly to YouTube, Facebook, and (new this time) Vimeo or DailyMotion.

PowerDirector 10 also includes some important new performance features designed to ensure that it’s faster than ever. So OpenCL support can speed up video effects rendering by up to 380%; Intelligent SVRT analyzes your project and recommends the output profile which will deliver the best quality and speed; and a range of more general improvements (including an optimised H.264 encoder) mean your movie should be rendered in less than half the time taken by the previous version (and that wasn’t exactly slow).

Just as with those previous versions, PowerDirector 10 is available in two editions. PowerDirector 10 Ultra is the high-end suite, which includes everything we’ve mentioned here, and is priced at $99.95.

That’s not actually a bad price at all for what you get, but if you don’t need the 3D features, native 64-bit support, direct import from AVCHD camcorders or full HD preview, then you could always opt for PowerDirector 10 Deluxe: it’s yours for $69.95.

If you’re a PowerDirector fan, or just looking for a quality video editor at the moment, then you’ll probably want to take a closer look at PowerDirector 10 immediately. And we understand: it looks like a great product, and a 30-day trial edition is available now.

If you’re not quite so sure, though, then we understand that, too. Check back in a couple of days when we’ll have a full review online, giving you a much more detailed look at and evaluation of all PowerDirector 10‘s new features, and how the package behaves in real world testing.