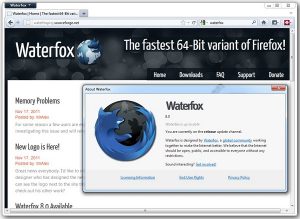 Each new release of Mozilla’s Firefox brings improved performance to this popular open-source web browser. But despite these welcome tweaks, Firefox remains hobbled in one major respect: it’s resolutely 32-bit.

There is an experimental 64-bit build of Firefox Nightly for Windows and Linux, but it’s an extremely early, unstable release and isn’t recommended for the casual user. So how can you enjoy Firefox in 64-bit without major risk? The answer lies with Waterfox 8.0.

As its name implies, Waterfox is a close relative of Firefox. In actual fact, it’s the same source code as found in the latest stable build of Firefox, compiled specifically for 64-bit versions of Windows. That means, name aside, you’re effectively running Firefox 64-bit, complete with all the performance improvements that brings, mostly through the improved handling of large amounts of memory that 64-bit computing brings.

Waterfox hasn’t simply been compiled for 64-bit systems as it is, though; the author has specifically compiled it with a number of optimizations that ensure it runs even more efficiently in 64-bit systems. It’s especially recommended for users of older, less powerful 64-bit systems as it’s known to load quicker and perform more responsively than Firefox in this environment.

Because Waterfox is built from the same source code as Firefox, it’s to all intents and purposes identical, so existing Firefox users should have no problems migrating across; in fact, when you run Waterfox for the first time you’ll find all your Firefox settings are in place as Waterfox -- like other alpha and beta builds of Firefox -- shares these with the main app.

There’s one major requirement before you install Waterfox: the software requires the 64-bit build of Microsoft’s Visual C++ 2010 Redistributable, otherwise you’ll get an error message involving msvcr100.dll. You’ll also need to install dedicated 64-bit builds of Flash, Silverlight and Java, handy links are provided at the Waterfox download page, along with links to other languages and dictionaries (the main software is available in US English only).

Waterfox 8.0 is available now as a free download for PCs running 64-bit versions of Windows XP, Vista and 7.