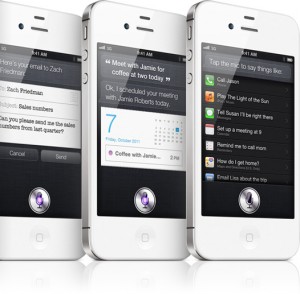 I chuckle whenever someone in comments calls me anti-Apple. Much of what I write here derives from experience. Sometimes that works for Apple, or whatever other vendor, sometimes against it. Today, I've got a wet, smoochy kiss for iOS 5 and iPhone 4S and kick aside the head for Android and Samsung Galaxy S II Skyrocket.

Yesterday, my daughter met up with a friend for the Toyland Parade in the North Park community of San Diego. She's a live-in-the-moment, never-think-ahead teen. (Who isn't?) So, of course, when we got in the car and I expected my girl knew the way to the meetup, she didn't. After I chided her, out came the white iPhone 4S, and she spoke: "Direction to Claire de Lune". I knew where this was going, thinking: "There's no way Siri is going to get this right".

Wrong. Within seconds, Siri's weird female robotic voice repeated the search query and Google Maps app launched showing where we were and how to get where we needed to be. I gulped, sheepishly, wondering if my Android, the aforementioned Skyrocket, could do at least as well. So, later, after dropping off my daughter and returning home, I experimented. It's really sad commentary on just how little my phone's voice-control features get used. Asking for directions brought up a Google search page with strange variations of Claire de Lune and one linking to Google Maps and another to the coffee shop website.

But the the strangest thing happened today. I repeated the exercise so I could capture a screenshot to illustrate this post. I got out the phone, tapped the microphone icon and spoke "directions to Claire de Lune". The text flashed back at me green on black (or dark grey). I tapped and got a Google Map with directions. It worked! Android got off the mat before the count reached 10 and delivered a sudden blow to Siri. Maybe, just maybe, Android voice capabilities could take on Siri.

So I asked: "What time is it in Moscow?" Google search page opened and across the top: "3:57 am Monday (MSK) - Time in Moscow, Russia". I next asked: "Where is the best price for Xbox 360?" That brought up another map and a banner ad. Map: Best Buy in Mission Valley community of San Diego. Ad: Microsoft Store, which is perhaps a kilometer farther, if that. If you count refurbished items, Best Buy has better prices than Microsoft Store. But could Android have simply picked up on "best" in the name -- and that's why I got Best Buy? So I tried: "Best price on macaroni and cheese?" That brought up a search page, where the first entry led to a mac & cheese "compare prices" page from Nextag. Cough, cough -- $70 from Neiman Marcus. Wow, everything really does cost more there.

Okay, how about: "How old is William Shatner". That popped up web page with text across top: "William Shatner age - 80 years (March 22, 1931). "What was Mark Twain's IQ?" brought up another search page with wiki.answers giving 135-140. "What was Charles Dickens' IQ?" brought up a strange selection of search results but answer nevertheless: 180. Damn, I knew he was smart. Whoa, Copernicus was only 160. 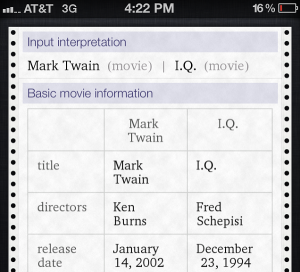 The story would be incomplete without Siri's answers. They surprised me. Firstly, I give kudos to Apple for offering the better user interface response, the robotic voice and text on screen. My daughter asked the questions. Siri spoke the correct time in Moscow but totally blew "Where is the best price for Xbox 360?" Answer: "I found 13 toy stores, 7 of them are fairly close to you. I've sorted them by rating". I skipped mac & cheese. William Shatner's age? Better than Android: "80 years 8 months 12 days".

Uh-oh. For "What was Mark Twain's IQ?" Siri brought up a comparison of movies "Mark Twain" and "IQ". Get the frak. The information filled several screens, too."IQ" released in 1994 and generated box office receipts of $26.3 million -- not exactly a blockbuster. "Mark Twain" is a 2002 film and was much longer -- 212 minutes to the other's 100 minutes.

So in the end, Android wasn't so humiliated after all. Android did at least as well, so I have to withdraw the offer for a wet, smoochy Siri kiss. But, hey, I already had written the first four graphs of the story before doing additional testing, and the headline reads so well.

248 Responses to Siri humbled my Android