Now you can get GIMP's power with Photoshop's look and feel 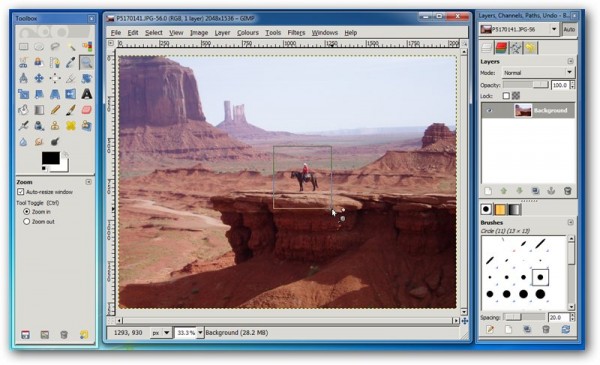 You’re after a free image editor. You want a powerful one, something that gets compared favorably to the likes of Photoshop. You find Paint.NET and PixBuilder Studio intriguing, but just that little bit lacking. Ultimately, though, when you ask about a powerful, free image editor, you’re going to be pointed towards GIMP.

And that’s where the trouble begins, because while GIMP is undoubtedly the most powerful free image-editing tool there is, it’s also one that puts newcomers off because of its multi-paned floating user interface. But what if you could marry the interface of Photoshop with the power (and free price tag) of GIMP? The good news is, you can, thanks to an open-source, cross-platform program called GIMPshop.

GIMPshop, as its name implies, is built on the open-source code behind GIMP. What the authors have cleverly done is apply some design tweaks to the user interface to give it a more familiar feel to other image editors out there, in particular Photoshop.

This has been achieved in three different ways: first, GIMPshop alters GIMP’s menu structure to closely resemble Photoshop’s. Second, it’s substituted various terminology with that used by Adobe’s flagship product. And finally, it utilises a plug-in called “Deweirdifier” to combine GIMP’s many floating windows into just three: the Toolbox on the left, main window in the middle and all other key windows -- brushes, layers and so on – merged into one pane on the right.

The end result is that you get to enjoy GIMP’s raw power wrapped up in an interface that will feel familiar if you’ve ever used Photoshop or the myriad of other image-editing tools that have been inspired by its design.

There’s just one hurdle you need to jump if you’re a Windows user: unlike the Mac and Linux builds, the Windows version of GIMPshop is distributed via the InstallIQ wrapper. This rather annoying tool will try to persuade you to install up to five other apps alongside GIMPshop -- once you’ve clicked the first Accept button to install GIMPshop, just keep clicking Decline until InstallIQ gets the hint and lets you install the app you came for in the first place.

GIMPshop is a free, open-source download for Windows, Mac OS X and Linux.