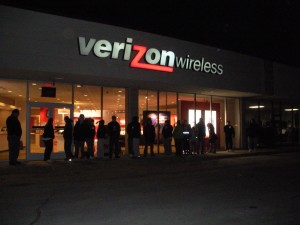 Mobile network operator Verizon Wireless on Wednesday announced it will be auctioning off all of its 700 MHz A and B spectrum licenses if it can obtain the AWS licenses from SpectrumCo, a joint venture held by the United States' biggest multi-network operators: Comcast, Time Warner Cable, Bright House Networks, Cox, and Leap Wireless.

Last December, SpectrumCo announced it would be selling 122 licenses in the AWS spectrum to Verizon Wireless for $3.6 billion so the wireless carrier could further build out its 4G LTE network, which currently resides in the upper C band in the 700MHz block.

This would all have to pass regulatory muster, of course, and this is the reason for the spectrum sale.

"Since wireless operators, large and small, have expressed concern about the availability of high-quality spectrum, we believe our 700 MHz licenses will be attractive to a wide range of buyers," said Molly Feldman, vice president of Business Development for Verizon Wireless in a statement on Wednesday. "Moreover, provided our acquisition of AWS spectrum is approved, our open sale process will ensure these A and B spectrum licenses are quickly and fairly made available for the benefit of other carriers and their customers."

The B block licenses constitute cellular market regions which tend to be the more suburban and rural areas, but include such areas as Chicago, Memphis, and Charlotte among the list of more than fifty zones.

One Response to Verizon Wireless agrees to sell off wireless spectrum pending $3.6B cable deal