There's something scary about Chromebook 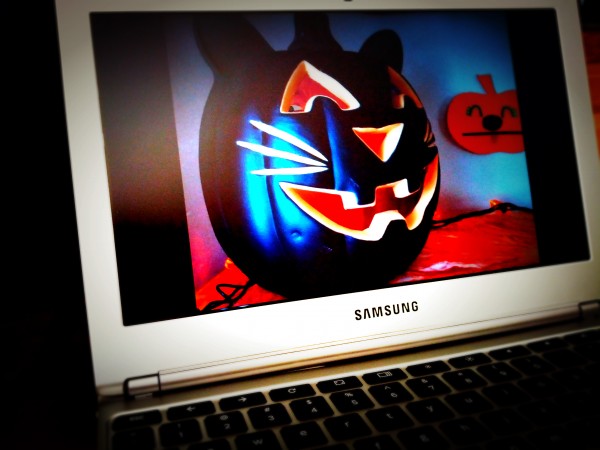 On Monday night while watching "Resident Evil: Afterlife" on USA Network, Google aired the first Chromebook commercial -- not once but twice. The ad played a lot better during primetime than on YouTube, with that oh-so tempting $249 price reaching out from the screen. Advertising where real people go shows Google's seriousness to reaching the masses. Make no mistake, something of a computing revolution quietly is brewing here.

Chromebook is still the top-selling laptop at Amazon, and that while being out of stock. Meanwhile, the cloud-connected device gains some surprising followers. On Google+, Chromebook chatter cracks the pipes, and mainly because of the newest model, which matches MacBook Air's form factor and ergonomics, including 11.6-inch screen and better keyboard, for one-quarter the price.

Simon Phipps generated big buzz over the weekend with InfoWorld Story "Why I left MacBook for Chromebook". I must admit to feeling jealous about the attention, seeing as I did something similar sooner, which I wrote about in my May ("Samsung Series 5 550 first-impressions") and in September ("Chromebook changed my life"). Phipps and I moved from MacBooks (the Air for me) to the 550 model. For nearly two weeks now, I've exclusively used the $249 model and almost love it (more on that in a few paragraphs).

If you don't know who Phipps is, you really should find out. He's one of the gods of open source and commands high respect among oft-fussy computing elitists. He writes:

I didn't think I'd replace my MacBook Pro with a Chromebook, but the truth is my old Apple friend has been sitting on the end of its Kensington cable in the office for weeks now, occasionally acting as a printer server or a remote application server but otherwise gathering dust. We'll see how long that lasts, but for now it's true: I left my MacBook for a Chromebook.

Over at The Verge, Chris Ziegler calls the new Chromebook "$1,000 worth of design made with $100 worth of materials". That's apt description, given visual similarity to MacBook Air and users like Phipps, or even myself, abandoning Apple laptops for another running Chrome OS -- and being happy about it.

Ian Betteridge is nearly where Phipps and I are, posting to Google+ yesterday:

I probably split my time 50/50 between one of my two Chromebooks (a Series 5 550 and one of the new ARM ones) and my MacBook Air. But apart from work-related stuff which requires me to use my Mac, I could easily see myself just using the Chromebook. The one app which really keeps me back on the Mac: OmniFocus. Although there are good GTD web apps around (Nirvana is the best) nothing matches the power of OmniFocus. Yet.

Ziegler rightly acknowledges that the $249 Chromebook is not some "pivotal moment where Chrome OS’s performance suddenly matches that of Windows or OS X". But it doesn't need to be. "Yet, somehow, I can’t help but like it", he concedes. We share what he calls the "irrational love of the Chromebook platform".

There is something irrational here, and I'm not talking about the whole concept, running apps in a browser and storing stuff in the cloud. I find the 550 Chromebook to be plenty fast, as in nothing lost in the experience moving from top-end MacBook Air. But the newer Google mobile, which swaps Intel processor for ARM, isn't nearly fast enough most of the time. Working in place is fine. Moving among a bunch of open tabs takes time. There is too much waiting. Yet I can't give up the exceptional ergonomics and killer keyboard. So I wait, and wonder how other people will react to this little laptop with the pretty price. Will others be satisfied enough? If they are, will Chromebook be what netbooks promised but couldn't deliver?

The first netbooks ran Linux, before Microsoft frightened up dumbed-down Windows and later licensed XP Home. "While it's not being talked about in this way, the Chromebook line is probably the most successful Linux desktop/laptop computer we've seen to date", Phipps observes. "Most of the software on the device is open source and it relies heavily on open standards. The options for updating it yourself are openly discussed, and enterprising hackers have even loaded full GNU/Linux distributions onto it". Chromebook is in that sense, a netbook done better.

Or perhaps it's done right. Google isn't just advertising Chromebook "for everyone" but making the overall experience more consumer-friendly. The new Chromebook starts into a meet-and-greet screen -- the new "Get Started" app, which provides information in 16 areas, such as creating documents, making video or voice calls, printing, using web apps and working offline. Users can even "schedule a call with a Chromebook Guide to get a personalized tour of your new Chromebook". Everything about the out-of-box experience fits with the "for everyone" marketing. The app also is available for older Chromebooks, dispatched automatically.

Chromebook setup is as easy logging into a Google account. Backup and sync are automatic, as are updates. That's all extremely consumer-friendly. What if some consumers like the devices enough to bring them to work. BYOD is what forced enterprises to adopt smartphones and tablets. Could Chromebook be next? I keep asking: Why not?

"Just got my new Chromebook -- less that 1 minute from receiving to being up and running. I love it!" Genevieve Gallagher posted to Google+ this morning. Audio wouldn't work. But after the portable "installed updates, I logged back in and I have audio!﻿"

Chromebook is good enough for Google CEO Larry Page, who posts to Google+: "Been loving using mine!"

This Chromebook represents the true future of the PC. It's cheaper than any device that's remotely comparable to it be it tablet, laptop or any of the hybrids. It depends not on the local computer but on network services to get things done. Sun's motto used to be the network is the computer. Today, that motto has been made reality in my hands by Google and Samsung with the ARM Chromebook. This really does change everything.

If he's right, and I so-o-o-o agree, the new Chromebook is something scary.

44 Responses to There's something scary about Chromebook