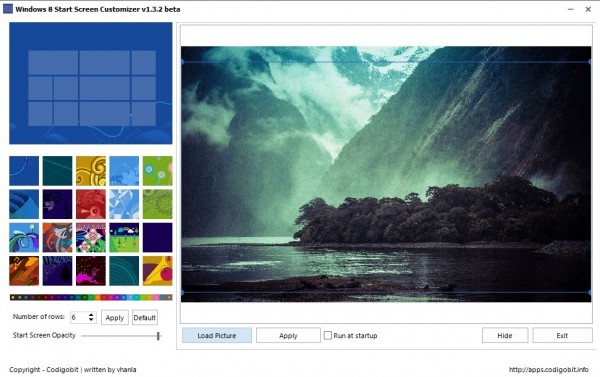 The Windows 8 Start screen is without doubt one of the prominent new features of the operating system. It is the first screen of the operating system that new users see when logging in and also the screen that the majority see every time they do so. While there are ways to bypass the Start screen to go straight to the desktop, it is unlikely that the majority of people will make use of those.

It may feel like an oversight to some users that Microsoft decided to lock down the available Start screen customization options. Instead of giving users the option to select any background image they want, the company limits the Start screen backgrounds to 20. While Windows 8 users are still free to select custom pictures as desktop backgrounds, they do not have the same option when it comes to this important part of the operating system.

Programs like Stardock's Decor8 add back customization options. The program is not free though, and while professionally done, some users may prefer to use a free alternative to change the background image of the Windows 8 Start screen.

The free Windows 8 Start Screen Customizer has come a long way since its initial release earlier this year. First versions of the program were cumbersome to use, but the last version is as easy to use as Stardock's commercial program.

Note: The program is still in beta. I did not run into any issues using it on a 64-bit version of Windows 8 Pro, but being beta, I suggest you create a system restore point or full system backup before you use the software.

The program is offered as a 7-zip file that you need to unpack with the archiving software or another software supporting the 7z format. You will notice that the file extension of the unpacked file has been modified by its author, likely to avoid being blocked by security software. A test on Virustotal confirmed that the program is safe to use. You need to change the file extension from .ex_ to .exe.

To change the Start screen background, click on Load Picture to select an image from your local system. Use drag and drop to move the rectangle over the part of the image that you want as your background image. Once you are done click on apply to set the new background.

The software switches to the start Screen automatically so that you can verify that everything is in order.

Windows 8 Start Screen Optimizer is an unobtrusive application that does not make permanent changes to the system. Cautious users may want to wait until it is out of beta before they start using the program.