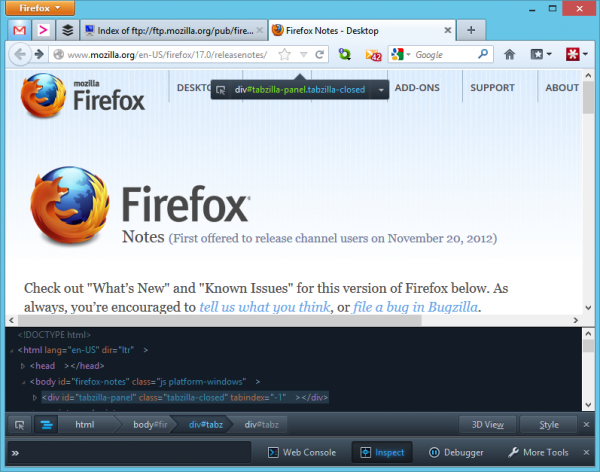 Mozilla has launched Firefox 17 FINAL, the latest stable release of its open-source, cross-platform web browser. Version 17 has one major new feature -- click-to-play blocklisting, which prevents vulnerable plugins from running without the user’s permission.

Other changes include a slight tweak to the Awesome Bar, additional developer tools and web standards, plus fixes and performance improvements. The new release comes on the same day that rival browser Opera 12.11 gets a minor update.

The standout new feature in Firefox 17 is the implementation of the click-to-play blocklisting feature. Outdated or vulnerable plugins that are marked with the click-to-play flag will not load by default, but instead require user activation. Users can then choose to load the plug-in aware of the security risks, or try to source an update. Users running older versions of Adobe Flash, Adobe Reader or Silverlight will be likely to see this feature first.

Version 17 also implements larger icons in the Awesome Bar as a minor refresh of the user interface, while developers will benefit from a redesigned Markup panel in the Page Inspector, which allows quick editing of the DOM.

Other developer-friendly improvements include iterable JavaScript Maps and Sets, implementation of SCG FillPaint and StrokePaint, plus unspecified improvements that should make the Web Console, Debugger and Developer all quicker and simpler to use.

Firefox 17 also comes with over 20 performance improvements, according to Mozilla, many of which fix issues with the New Tab page. These are accompanied by two specific fixes for pointer lock in web apps and page scrolling on sites with fixed headers.

The update is rounded off by support for the Sandbox attribute for iFrames in HTML5, something that Mozilla claims will improve security. Sadly, version 17 also marks the first version of Firefox for Mac OS X that isn’t supported on OS X 10.5 (Leopard). Firefox 17 FINAL is available as a free, open-source download for PC, Mac and Linux.