10 end-of-the-world classics for the Mayan apocalypse 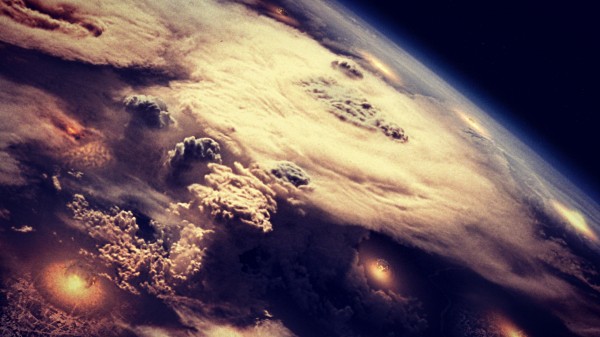 We're not dead, at least not as I write. Dec. 21, 2012 is supposed to be the end of the world, based on ancient Mayan prophecies. If we do all die today, well, it was nice knowing you. Humans certainly are obsessed with apocalypse. Hell, it's biblical. Civilization's end, and how survivors cope, is quite the popular theme in literature and other artwork, including movies and television. I got to thinking: "Why not review some of the classics?"

So I've compiled a list of my favorites, from least to most, all but one from the twentieth century (the other circa 1898). Sorry, "The Walking Dead" fans. I also skip late-1990 movies like "Armageddon" and "Deep Impact". Some of the works are deliberately chosen for not being mainstream but worthy of the world-ending genre.

10. Farnham's Freehold is unusual for the genre. The obsessive main character and friends find themselves in his fallout shelter just as an atomic war starts. One giant blast comes and they open the door onto a future earth. It's by no means Robert A. Heinlein's best work, and I'm disturbed by some of the racial undertones. But it's a solid story pitting man against man. The novel published in 1964.

9. The Day After. I continue with cheesy nuclear nightmare TV movie that aired on ABC in November 1983. About 100 million people tuned in to watch the world nuked. It was an event, or that's how I remember the night (Sunday?). The Cold War raged, and a nuclear war between the Soviet Union and United States seemed all too possible. The Day After graphically depicts devastation and its aftermath, but the special effects look really dated today.

8. Night of the Comet is another 1980s artifact. Every 65 million years the earth passes through a comet's tail. It's no coincidence that's how long ago the dinosaurs died. Hint. Hint. Anyone behind steel enclosures is protected from the deadly effects.

So who survives to repopulate the earth? A couple of valley girls more interested in shopping the deserted mall. They're sisters, who at one point argue over the last guy on earth (so they think). This campy movie even has zombies.

7. I Am Legend. Speaking of Zombies, Richard Matheson's 1954 novel is a last-man-on-earth story, or one who isn't a vampire-like undead. The work helped define the zombie genre, inspiring three movies, including "The Omega Man" starring Charlton Heston in 1971 and "I Am Legend" featuring Will Smith in 2007. Movie "Night of the Living Dead", game and movie series "Resident Evil" and graphic novel and TV series "The Walking Dead" all pay homage to the novel.

6. Five Million Years to Earth. In this 1967 classic British flick ("Quatermass and the Pit" across the pond), a spaceship full of grasshopper-like aliens (martians) is found long buried in the London Underground. Opening the ship unleashes telekinetic forces and apparitions of martin armies.

5. War of the Worlds. We're not done with martians. H.G. Wells' 1898 novel has them invading and occupying the earth, and there is no human stopping them. The story was brilliant for its era and those following. The 1938 radio adaption was so good, panic followed as some people believed martians really were invading the earth.

4. On the Beach is a 1957 novel by Nevil Shute, from which a film was made in 1961. The story is post-apocalyptic. Atomic war kills off the human race everywhere but Australia. But radiation is headed south and certain death with it. The story is the struggle for survival and hope and eventual acceptance about inevitable doom.

3. Lucifer's Hammer. The novel by Larry Niven and Jerry Pournelle is a comet story of another kind. There's no passing through the tail but direct impact and devastation and survival that follows. The story is as much soap opera as anything else and captures the late-1970s Los Angeles social scene. I first read this book in college.

2. Nightfall isn't about the end of our world but another. In the 1941 short story by Isaac Asimov, civilization collapses on the planet Lagash about every 2,000 years, coincidentally (or not) when darkness comes. Six suns perpetually keep the people in light, except for cycles of total night when the sky fills with stars, leading to global madness. It's a clever concept and one of Asimov's best stories.

1. Day of the Triffids. John Wyndham's 1951 novel opens with Bill Masen waking in the hospital on the day bandages come off his eyes and reveal whether he is permanently blind. Unbeknownst to Masen, a bright meteor shower the night before has blinded most of earth's population (He can see, turns out). Worse, the blind are helpless against flesh-eating plants called Triffids that humans had harvested for rich oils. Wyndham's story is among the very best of the apocalyptic genre. It's fresh, riveting and political.