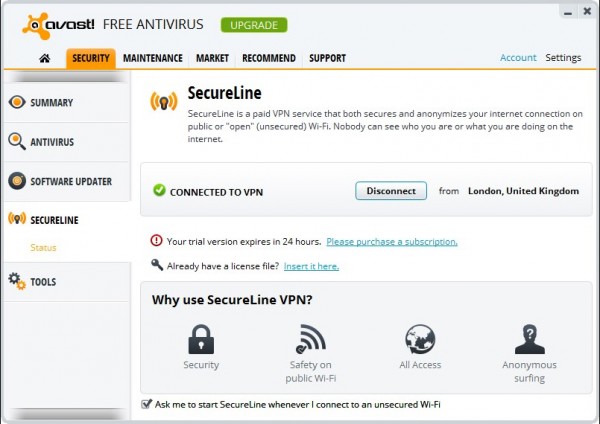 Avast Software has released avast! Free Antivirus 8.0.1488 and avast! Internet Security 8.0.1488 for PCs running Windows XP or later. Version 8.0.1488 is the first notable update since version 8 was released at the end of February.

Version 8.0.1488 adds one major new feature to the security tool’s roster: a SecureLine component, which provides protection for users browsing over Wi-Fi via VPN. The feature isn’t provided free, but comes with a free 24-hour trial that can be activated at any time. Thereafter, access costs from $7.99 a month.

VPN is used to encrypt data prior to it being transmitted over the internet -- although primarily used by businesses, it’s also increasingly used by security conscious users who wish to use "open" Wi-Fi networks -- often public -- where data can be easily intercepted by other network users. VPNs also allow users to surf anonymously and fake their location to bypass web services limited to specific geographic locations.

The new SecureLine feature is installed by default with the main avast! Package, but isn’t switched on. Once installed, users should double-click the avast! Notification area icon and choose SecureLine under the Security tab. From here, clicking the Activate link opens a window where users can start the free 24-hour trial or purchase a SecureLine license for $7.99 a month or $59.99 for a full year.

After activating, users can manually connect to the VPN at any time, choosing the location closest to them or picking an alternative location -- at time of writing, nine locations are provided: Dallas, Miami, New York and Seattle in the US, London, Frankfurt, Amsterdam and Prague in Europe, and Singapore. Users can also instruct SecureLine to automatically start whenever users attempt to connect to an insecure Wi-Fi network.

Version 8.0.1488 also comes with the promised of improved compatibility with Screen readers, and improvements to the Software Updater component. It also fixes several unspecified user-interface glitches and comes with the usual promise of improved stability and performance. 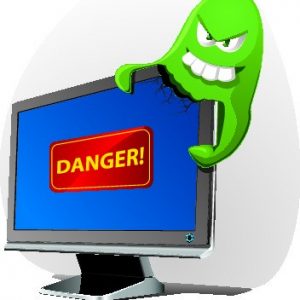 avast! Free Antivirus 8.0.1488 is available now as a freeware download for PCs running Windows 2000 or later. Users can upgrade to the Pro version with additional sandboxing and online shopping protection for as little as $19.99 for a one-user, one-year license through the Downloadcrew Software Store, a saving of 50 per cent on the MSRP -- a two-year, single-PC license is also available. Three-PC licenses for one year and two years are also available.

avast! Internet Security 8.0.1488 is also available as a free trial download for PCs running Windows 2000 or later. This version adds firewall and anti-spam protection to the features found in avast! Pro Antivirus, and a one-year, single-license version costs just $29.99 at the Downloadcrew Software Store, a saving of 40 per cent on the MSRP. A three-PC license is also available for $41.99, again saving 40 per cent off the MSRP.