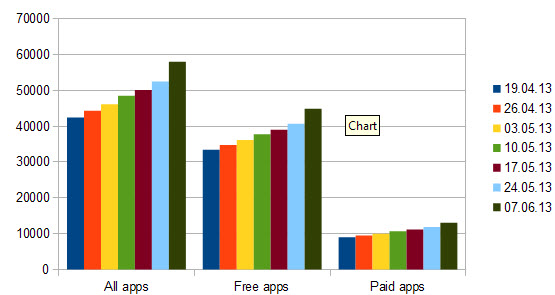 Thirty-second in a series. Windows Store has seen one of the largest growths in its history this week breaking the 3,000 apps mark for the first time this year. A total of 3,033 apps were released, raising the total app count of the US Windows Store to 58,011 apps.

The increase can be at least partially explained by an influx of mass produced apps in the store.  One developer alone published more than 100 commercial language learning books to the store, another dozens of audio book apps.

The official Skype application was updated this week enhancing the app's HD video support on Windows 8. Video callers using the app may now be able to send 720p video and receive 1080p video when they are using the application depending on the camera, available network bandwidth and the setup on the receiving device.

Microsoft published a video highlighting some of the new features of the Windows 8.1 update that it plans to release as a preview version on June 26 to the public. You can head over to Wayne's article to watch the video if you have not done so already.

App of the Week

The big release this week is the official Bing Translator app by Microsoft. It is on first glance a basic translator app that lets you translate from one language to another. 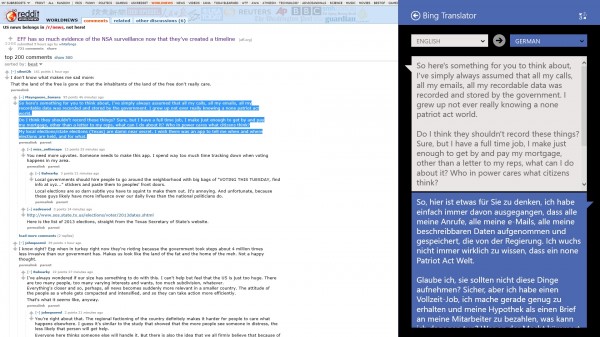 Just enter a word, phrase or sentence into the form, modify the source and target language, and hit the return key to get translations right on the screen.

The translator supports more than 40 different languages of which six are available for offline access. You do need to download dictionaries to use the app when you are not connected to the Internet.

Each dictionary pack has a size of about 120 Megabyte adding language pairs to the app. A pair is made up of English on one side and Chinese Simplified, French, German, Italian, Portuguese or Spanish on the other. What this means is that you can only translate from one of the languages to English and vice verse, but not directly between the six other languages. Note that this is only true when you are offline.

You can enter text that you want translated using the keyboard or a built-in camera which works surprisingly well.

The Bing Translator app can be snapped to either side of the screen so that you can use its functionality when you are working in another application or on the desktop. You can furthermore use the Share Charm to send text that you want translated to the app directly. Note that sharing works only when you are using Start screen apps. 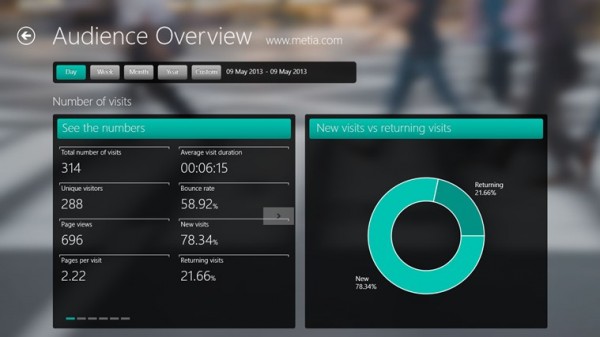 The app for webmasters and marketers displays web statistics from Google Analytics in its interface. You do need to sign in with your Google Analytics account to get started, set up a profile afterwards to get access to the 31 different reports the app makes available.

The app updates key data in 15 minute intervals and displays changes on live tiles directly on the Start screen.

You can pin reports that you are interested in to the Start screen as well to get access to the latest data right from there without opening the application at all. 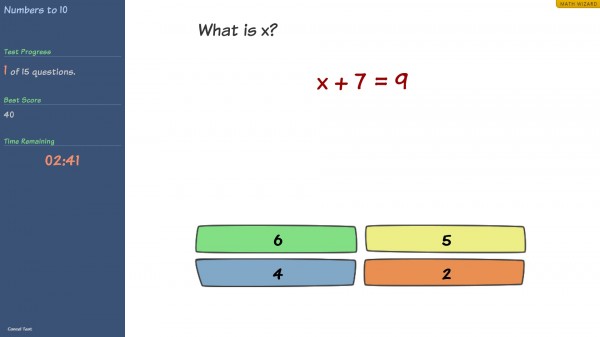 Math Wizard is a math teaching program for children that is making available two exercises for free and additional exercises as in-app purchases.

The two free exercises cover the numbers to 10 and quick counting. The first is all about adding and subtracting numbers, the second to quickly count "real life" objects such as wooden sticks.

Depending on the age of the child, it is probably best to explain the concepts of the game in the first session to make sure everything is understood. 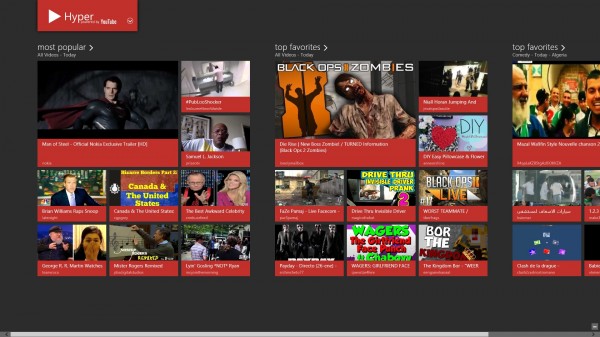 There are so many YouTube apps out there that it is hard to justify listing another in a top of the week list. Hyper does offer features though that make it an interesting app.

First, it enables you to customize the app's home screen to your liking. Want to see updates from subscriptions here? Done. Your favorites? You got it!  Comedy videos that have been uploaded today by users from Algeria? No problem either.

The app is very versatile in what is displayed on its home screen. This is not the only interesting feature though.

You can create local playlists from YouTube videos, use your keyboard's media buttons to control the playback, snap videos to the side to watch them there, play videos in the background and even download them.

This is one of the best unofficial YouTube apps available for Windows 8. 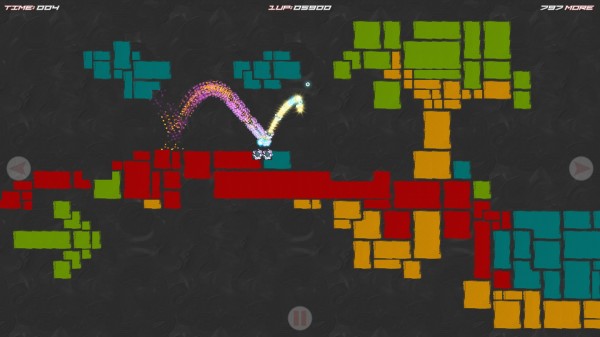 Basho is an action game for Windows 8 that you control with keys on the keyboard or by touch. Your goal in the game is to reach the exit of each level. What makes this difficult is that you control a  worm-like entity that destroys bricks it touches.

Think of it as a jump and run with a slightly different concept. You bounce whenever you hit a brick in the game, and the brick that you just hit vanishes into thin air afterwards.

It is a fun game that uses plenty of sparkling explosions and effects as well as an interesting soundtrack to keep you entertained. 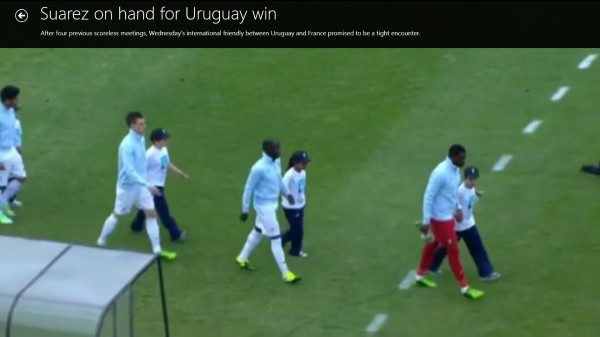 If you are a fan of football (soccer if you are from the US) then you may be interested in this app. It is based on the mobile app of the same name that is available for all major phone operating systems.

Videos play in full screen and either without sound or English commentary.

You can click on any upcoming or live match to see live scores, line up information, a ticker providing you with important information and detailed stats as well.

Another option that you have is to dive right into a league of choice to see standings, matches, news and other league related information. 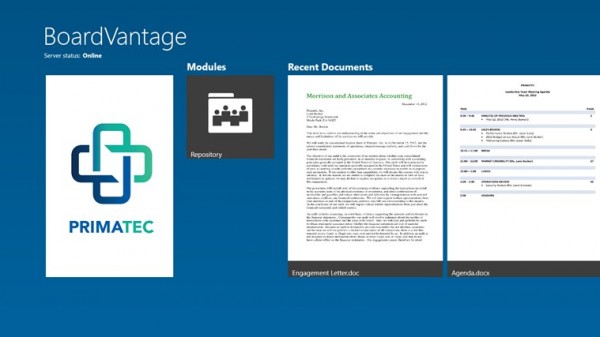 Backplane is a business app that gives you access to documents on SharePoint, Livelink, EMC repositories and shared folders.

The app provides you with secure access to enterprise repositories. The developers note that no data is saved in the cloud or replicated

It is important to note that a BoardVantage subscription is required to use the application. 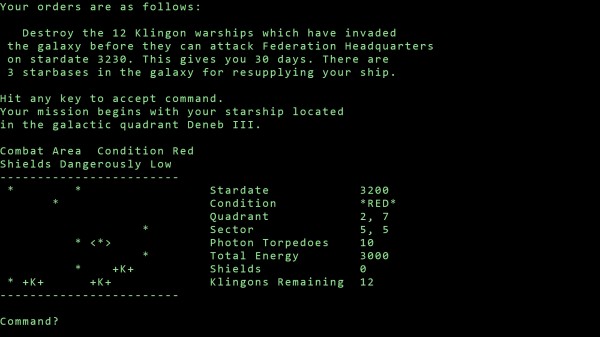 Text adventures from companies such as Infocom or Magnetic Scrolls were children of their time. Computers were just not powerful enough and companies made the most out of what few resources they could get their hands on.

Star Trek Classic takes you back to that time. It is a text adventure created by Star Trek fans for fans. If you are new to the series or space travel in general, make sure to read through the instructions that the game offers to display on start.

Your main task in the game is to defeat all Klingon warships before they can attack the headquarters.