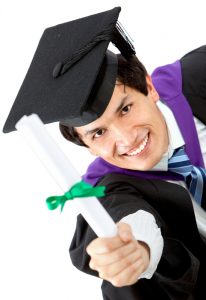 In case you missed it, the Rambling Wrecks of Georgia Tech will next year begin offering an online masters degree in computer science for a total price of just under $7,000 -- about 80 percent less than the current in-state tuition for an equivalent campus-based program. The degree program, offered in cooperation with AT&T and courseware company Udacity, will cost the same no matter where the students live, though two thirds are expected to live and work outside the USA. Time to complete the degree will vary but Georgia Tech thinks most students will require about three years to finish. The program is inspired, we’re told, by the current hiring crisis for computer science grads -- a crisis that anyone who reads this column knows does not exist.

Programmers in Bangalore will soon boast Georgia Tech degrees without even having a passport.

There are plenty of online courses available from prestigious universities like MIT and Harvard -- most of them free. There are plenty of online degree programs, too -- most of them not free and in fact not even discounted. So this Georgia Tech program, made possible by a $2 million grant from AT&T, is something else. It could be the future of technical education. It could be the beginning of the end for elite U.S university programs. Or it might well be both.

The online classes are all free, by the way, it’s just the degree that costs money.

This technical capability has been around for several years but no prestigious U.S. university has made the jump before now because it’s too scary. Georgia Tech is launching its program, I believe, to gain first-mover advantage in this new industry, which I suppose is education, maybe training, but more properly something more like brand sharing or status conferral.

I predict the program will be good for Georgia Tech but not especially good for the people of Georgia. I further predict it will be not very good for U.S. higher education and will hurt the U.S. technical job market. Still, I don’t blame Georgia Tech for this audacious move. Somebody was going to do it, why not them?

Here are some problems with the plan as I understand it. Georgia Tech will start with 300 students, many of them AT&T employees, but hopes to expand the program to as many as 10,000 students -- about 40 times larger than the University’s current CS student population. This will require, according to their plan, eight additional university instructors to serve those 10,000 bodies.

I’m all for efficiency and most universities are anything but, however these numbers boggle my old mind. To make them work, in fact, requires a complete rethinking of the graduate education experience.

Ironically, looking at some of the communication that went into making this program, I’d say Georgia Tech sees it about the same way I do: it’s all about the money and not much about the education.

Let me explain. Georgia Tech is a major research university. In big research universities research and publishing count for everything and teaching counts for close to nothing, which is why there are so many bad teachers with endowed professorships. But research universities also often have professional schools like those that teach law, medicine, or business. A key distinction between research programs and professional programs is that most graduate research students have fellowships or assistantships of some sort. In other words they go to school for free in exchange for their labor teaching or researching. Professional schools, on the other hand, expect their students to pay their own way. There may be a few scholarships for MBA students, for example, but most get by on loans they’ll be paying back for decades to come.

Computer science is a research field but this new degree at Georgia Tech is specifically branded as being a professional degree. While that sounds extra-important what it really means is the students won’t matter at all to the University, which sees them strictly as cash flow -- up to $18 million per year according to the business plan.

So the logical questions one might ask about such a program (How do you maintain quality? What’s the impact on research? How can you serve 40 times as many students with only eight extra teachers?) might produce surprising answers.

You don’t maintain quality, nor do you intend to because this is, after all, a program that requires no standardized entrance testing of its applicants. Garbage-in, garbage-out.

The impact on research will be nada zilch, zero, because the new online students won’t ever directly interact with research teachers or even research graduate students, nor will they ever get a chance to benefit from such interaction. Out of sight, out of mind.

You can only serve 40 times as many students with eight extra heads by not serving them. Any hand-holding will be pushed off on Udacity or -- to a very limited extent -- to the 4000 Pearson locations where proctored tests will be given for the degree.

So what kind of Georgia Tech degree is this, anyway?

A very crappy one.

Good luck with that.

This is not to say that there aren’t plenty of ways to get costs out of computer science education. I was in Paris two weeks ago, for example, and had lunch with Xavier Neil, France’s second-largest ISP and fourth-largest mobile carrier, both called Free. Xavier, a self-taught programmer, is starting this fall in France a programming school that costs nothing at all to attend. He says the school is his effort to save France’s technical industries and I believe him.

Who will step up to start a similar school in America?