SharePoint isn't why Snowden breached the NSA -- lax security is 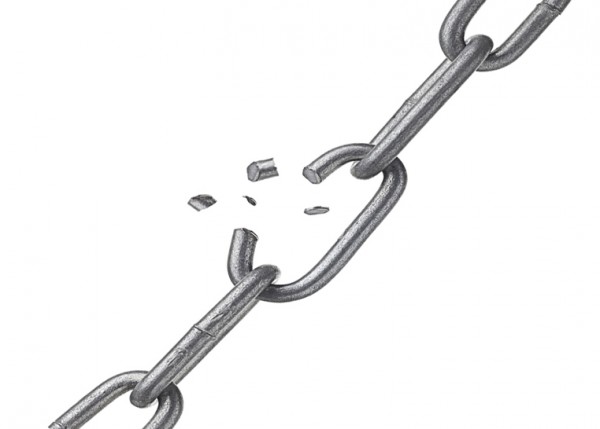 In what can be called nothing less than a clever use of well-planted deflection, the head of the NSA, General Keith Alexander, recently let loose that the NSA relies heavily on Microsoft SharePoint for its data sharing needs. Or, more accurately, he decided to namedrop on SharePoint to allude to a mistaken notion that the inherent use of SharePoint was the reason why the NSA got breached by Edward Snowden recently.

The information was first picked up by The Register after the General was caught making the admission at a recently broadcast cyber security forum (which can be viewed on YouTube in its entirety). He described of Snowden: "This leaker was a sysadmin who was trusted with moving the information to actually make sure that the right information was on the SharePoint servers that NSA Hawaii needed".

Further in, Gen Alexander went on to say how sysadmins have a "need" to use removable media for their day to day jobs. He also touched on the fact that there was a "break in trust and confidence" due to the Snowden incident, and the NSA is purportedly picking up the pieces and fixing the broken links in its internal security procedures.

The funny part about this entire charade is that this isn't the first major SharePoint incident the government has dealt with. Remember Bradley Manning and his massive document dump a few years back? His recent acquittal of the most damaging charges against him have him back in the news, but Wired Magazine reported back in 2011 that Manning used similar scraping scripts to rob the US Military of a comparable treasure trove of confidential information off SharePoint backbones.

An easy cop out is to point the finger at SharePoint for these breaches. But the problem is, SharePoint itself -- neither its mechanisms for handling security, nor the code that controls the platform's workings -- had nothing to do with how these two individuals made out like bandits. The Register pointed to a group of researchers that was set to present its findings on holes in SharePoint at DEFCON this year, but again, none of these supposed bugs was used in any way by Manning or Snowden. It's like blaming the manufacturer of the deadbolt to your front door for a criminal entering your home using a spare key. The US government has fallen victim to threats from within in every possible way.

If we're to use these as examples for how enterprise security, especially in government, needs fixing, then we need to pinpoint our efforts at the people and protocols behind how these 'big data' systems are employed.

If the NSA and its fellow government IT administrators are anything like the corporate world, their approach to security regarding IT infrastructure (especially SharePoint) is probably way too laid back for its own good. This lax attitude towards securing data sharing platforms has proven to be an issue time and time again. Most recently, InfoSecurity magazine released a (not-so) shocking study that claims only about one-third of businesses using SharePoint have proper security policies in place detailing usage and access of the leak-prone platform.

The same study found that 65% of respondents admitted their organizations are not marking data into categories or sensitivity levels in any way. And again, while the study has no representation of US government branches, it wouldn't be surprising to see government IT admins following similar laziness as the corporate sector. Judging from the Manning and Snowden incidents hitting the US government in a span of only three years apart, it seems that the curator of some of the biggest secrets of the free world still can't get it right. 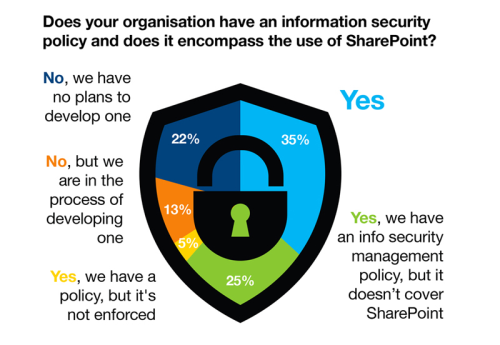 The NSA doesn't seem to be alone in its sub-par security practices surrounding SharePoint. A recent study by Emedia, covered in full by InfoSecurity magazine in February 2013, found that only about one-third of organizations with 25-5000 users employing SharePoint have security policies covering the platform. Even worse, just over one-fifth, or 22%, admitted that they don't have one and won't be making one. Security complacency seems to be an industry wide problem. (Image courtesy: Boldon James)

Call it poor planning, lack of oversight -- whatever you wish. It's not like the documentation isn't out there for how to properly implement SharePoint environments for highly secretive and confidential scenarios. A simple Google search yielded hundreds of helpful results, and I'm as far from a SharePoint administrator as could be. For example, Microsoft has this publicly available document on "Governance 101: Best practices for creating and managing team sites" with basic steps on how permissions should be doled out in SharePoint environments.

Even further, Microsoft has a "Plan your permissions strategy" article posted that goes into detail about the various aspects that help restrict data access in SharePoint. And finally, they published an in-depth TechNet wiki on security planning techniques that go deeply into best practices surrounding proper preparations for sites and content in SharePoint.

Not enough reading material for a head sysadmin? Just Google "security planning for sharepoint" and there are over 7 million results culled. To say that one would be hard pressed to have an easy set of resources in properly planning and executing a confidential SharePoint environment is nothing short of lying through one's teeth.

Lessons for the Enterprise: How to Prevent Your Own Data Leak Disaster

Even though my company primarily consults smaller organizations ('50 and unders' you can call them) on their IT needs, this doesn't mean that the same security protocols don't apply. Basic principles like leveraging security groups and using the concept of "least privilege" in assigning rights are common sense scruples that any sysadmin worth his weight in salt should know. I don't actively manage any SharePoint servers in my day to day work, but perhaps some outsider knowledge wouldn't be bad for those in charge of our nation's most sensitive SharePoint systems.

If you're tasked with protecting a SharePoint ecosystem, or other valuable data-rich infrastructures, here are some key steps that should be considered. A few items are really only practical for government implementation, but I'm going to mention them anyway (since our fine gov sysadmins could clearly learn a thing or two from the Manning-Snowden double header by now):

Can organizations of all sizes learn from the mishaps of the NSA and US Military? Surely. Common sense, back to basics security principles don't take a genius to figure out. The unfortunate truth of the matter is that most system administrators think that these kinds of incidents won't happen to them, or that security planning can be put off until later down the road. This kind of flawed thinking is what leads to oversight and downright fumbling when it comes to critical data breaches.

Remember: the Snowden and Manning incidents weren't examples of external threats. These leaks happened directly from within, behind closed doors which provided the false sense of security which ultimately, and ironically, represented the largest data breaches known to the United States. It's time we stop blindly blaming the software developers behind the products we employ, and start looking inwards towards those in charge of the keys to the information.