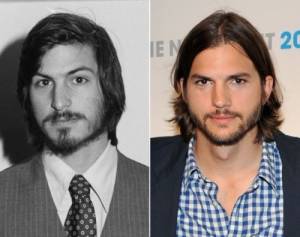 While Mary Alyce and the boys were in Theater 7 this weekend watching Percy Jackson: Sea of Monsters ("Needs more monsters," says Fallon, age 7) I was in Theater 2 watching Jobs, the Ashton Kutcher film about Steve Jobs ("Has enough monsters," says Bob, age 60).

I know the Jobs story fairly well having, well, lived some of it, but people have been asking me about the film so I thought I should check it out. Critics have not been kind and Steve Wozniak said he wouldn't recommend it. I can see why.

The film is beautifully shot and Kutcher's portrayal of Jobs, while not spot-on, is pretty darned good. He certainly has the look down and the walk. But Ashton Kutcher also produced this film and he's definitely a better actor than producer.

There are a lot of historical inaccuracies that just don't have to be there. Sometimes I guess the plot might demand it, like when they put Woz on the Macintosh team then have him leave Apple two years later than he actually did, apparently so they could include a pretty good scene where Woz pities Jobs. Didn't happen as far as I know and certainly didn't happen in 1985.

Also Woz simply wasn't that fat back then, nor was Bill Atkinson's hair ever that dark, and Matthew Modine is a giant compared to the real John Sculley.

Yes, Apple eventually sued Microsoft over fonts, but this film says they sued over the look and feel of Windows 1, which as I recall was the only version of Windows that actually had an Apple license and therefore a legit trash can.

But forget the chronology, the historical and casting errors, what we have here is a TV movie (think Pirates of Silicon Valley) with a feature budget -- hence the great cinematography -- yet without a soul. At the end of the film Jobs is cleaner and more stooped, but inside there's that same old Steve and we don't really understand him any better.

The great failing of this film is the same failing as with Walter Isaacson's book: something happened during Steve's NeXT years (which occupy less than 60 seconds of this 122 minute film) that turned Jobs from a brat into a leader, but they don't bother to cover that. In his later years Steve still wasn't an easy guy to know but he was an easier guy to know. His gut for product was still good but his positions were more considered and thought out. He inspired workers without trying so much to dominate or hypnotize them.

For years there was this running joke that Steve had changed, that he was no longer that guy who made us all uncomfortable. Then an hour or a day later he'd do something that would show he hadn't really changed at all. And yet at some point Steve did change. It was subtle but real and it set the tone for the last 15 years of his life -- the most productive 15 years of his life or that of any American executive.

This film misses all of that.