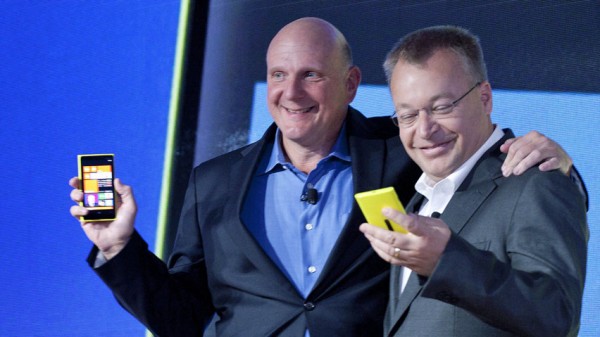 A good friend of mine called Microsoft buying Nokia "two stones clinging together trying to stay afloat". I wouldn’t go that far but I don’t think the prognosis is very good. On the other hand, I’m not sure it has to be good for Microsoft to achieve its goals for the merger. Huh?

This is why you come here, right, for my lateral thinking? I don’t think Nokia has to succeed in order for Microsoft to consider the acquisition a success.

This idea came to me as I was listening to the Jeep radio on my way into town to report my Internet outage. An editor from CNet was being interviewed about the Nokia acquisition on KCBS and he said Microsoft was "betting the company" on the deal. That sounded odd to me because $7.2 billion is a lot of money but Microsoft paid more than that for Skype. It’s something under a year of earnings for a company that has several such years stashed away. So why does this have to be Microsoft betting the company?

It doesn’t. The CNet guy is wrong.

The Nokia acquisition will have no impact on Microsoft’s Windows, Office, MSN, Xbox, or server strategies. None of those operations will take a budget hit to pay for Nokia and none of them will be merged into the Nokia operation. So most of Microsoft (certainly all the profitable bits) will go on as though Nokia had never happened.

This doesn’t mean Nokia isn’t important to Microsoft, but it sets some bounds on that importance. It’s possible, for example, that Skype might be folded into Nokia somehow but I’ll be surprised if that happens.

So why, then, did Microsoft buy Nokia? The stated reason is to better compete with Android and iOS, furthering Ballmer’s new devices and services strategy, but I think that game is already lost and this has more to do with finance than phones.

Microsoft, like Apple and a lot of other companies, has a problem with profits trapped overseas where they avoid for awhile US taxation. The big companies have been pushing for a tax holiday or at least a deal of some sort with the IRS but it isn’t happening. So Apple, sitting on $140+ billion has to borrow $17 billion to buy back shares and pay dividends because so much of its cash is tied-up overseas. But not Microsoft, which just bought Nokia -- a foreign company -- with some of its overseas cash. Redmond said so today. That makes the real price of Nokia not $7 billion but more like $4.5 billion, because it’s all pre-tax money.

Not only is Nokia cheaper than it looks, those 32,000 Nokia employees coming over to Microsoft transform the company into a true multinational with all the tax flexibility that implies. Microsoft may never pay US taxes again.

I think a lot of those acquired Nokia employees won’t be around for long, either. Most of them are in manufacturing, remember. Nokia has factories but Microsoft doesn’t. Nor does Microsoft want factories. So over some period of time I’d expect most of those former Nokia factories and former Nokia manufacturing employees to be sold off, primarily to Chinese and Indian acquirers. And the cash generated by those factory sales won’t be counted as profits because at best Microsoft will get rid of them at cost (no capital gain and no capital gain tax). So what does that make Microsoft’s acquisition of Nokia?

It’s also the acquisition of a global brand and a chance to keep Nokia from jumping into the Android camp.

But what of Stephen Elop, former Nokia CEO and now (again) a Microsoft VP. Is he poised to take Ballmer’s job?

Not by a long shot.

Elop failed at Nokia and he abandoned Microsoft by going to Nokia in the first place so I hardly think Ballmer will hand him the big job. There is a column or two in this question (who should run Microsoft?) and I have some ideas, but let’s leave that for another time and just say for now that it won’t be Stephen Elop.

Microsoft still has a problem in the phone business of course and if Nokia isn’t the answer what is? The more obvious acquisition to me was always Blackberry, not Nokia, and that could still come. Or if Microsoft is really serious about devices let it buy Qualcomm, which Intel was too stupid to buy.

Microsoft may be dumb, but it isn't stupid.

This column, the obvious post on Microsoft buying most of Nokia, is arriving later than I had hoped because we had an Internet failure today at our house on the side of a mountain in Sonoma County near Santa Rosa. We’re 15 minutes from town but the terrain is such that there’s no cellphone service from any carrier, we’re beyond the reach of DSL, there is no cable TV, so our only choices for Internet access are crappy satellite Internet or non-crappy fixed wireless, which we get from an ISP called CDS1.net. That connection is really good since the ISP’s tower in this part of the county is about 200 feet from my office window. It’s a pretty robust operation, too, with backup generators that also support the Sheriff’s radio network. So I was surprised when my Internet connection went down early Tuesday morning and dismayed when I realized that it was a single point of failure: I had no backup ISP and even my phones are all voice-over-IP. In order to report my outage I had to drive to town. There I learned that it was a router failure on the mountain so the prospect of using 200 feet of Cat5 to connect wasn’t an option. That’s why this column was written at Starbucks.