What if Marissa Mayer went to jail? 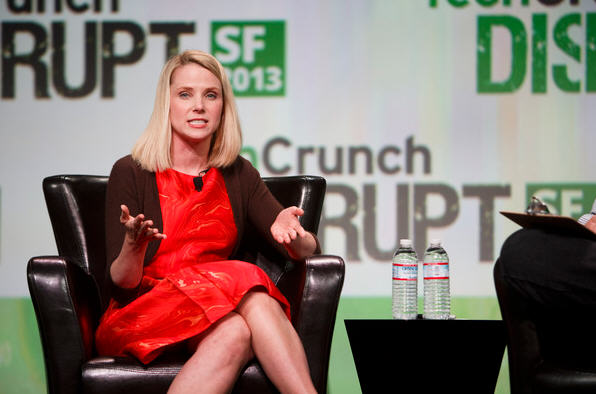 Wednesday at the TechCrunch Disrupt conference in San Francisco, Yahoo CEO Marissa Mayer presented her company’s side of fighting the National Security Agency over requests to have a look-see at the data of Yahoo users. It’s a tough fight, said Mayer, and one that takes place necessarily in private. Mayer was asked why tech companies had not simply decided to tell the public more about what the US surveillance industry was up to. "Releasing classified information is treason and you are incarcerated," she said.

Go directly to jail? No.

How would that work, exactly? Would black helicopters -- silent black helicopters -- land at Yahoo Intergalactic HQ and take Marissa Mayer away in chains? Wouldn’t that defeat the whole secrecy thing to see her being dragged, kicking and screaming, out of the building?

No really, what would happen?

So I asked my lawyer, Claude.

I’ve written about Claude Stern many times and he appeared, playing himself, in Triumph of the Nerds. Claude has been my lawyer since the early 1990s and is today a partner at Quinn Emanuel Urquhart & Sullivan LLP, one of America’s largest law firms devoted solely to litigation (so don’t even think of suing me). Quinn Emanuel is, to put it bluntly, 600 bad-ass lawyers who hate to lose and rarely do. As far as I know Quinn Emanuel does not represent Yahoo.

My inclination, if I were Marissa Mayer, would be to tell the NSA to make my day: "Take me to jail, but understand my company will pay whatever it costs to fight this, we will force it into the open, and -- by the way -- I’m still breast-feeding, so my baby comes too".

Here’s what the far more level-headed Claude says: "Companies typically do not yield to government interference unless they feel there is something to their advantage. Does anyone really believe that NSA would arrest FaceBook’s CEO if it did not comply with a random, illegal order? Please".

Notice how Claude cleverly replaced Yahoo’s Mayer with Facebook’s Zuckerberg, who is clearly not breast-feeding? But his point is still the same: companies could stand up to these NSA orders and most likely beat them if they chose to.

Either these companies are, as Claude suggests, getting more from the NSA than we are presently aware of, or maybe each CEO is just hoping someone else will be the one to stand up to the bully. I prefer to think it is the latter case. And since I know a lot of CEOs and the way they tend to think, I’d put money on that being the situation.

The CEOs and their companies, then, are either gutless or corrupt. Charming.

The NSA orders are illegal, it’s not treason to reject them, and even if it were technically treason there is still a right to both due process and -- in 21st century corporate America -- to spend whatever it takes to beat the rap.

There’s no way Marissa’s baby would spend even an hour in jail, which is exactly why I wish she’d take a public stand on the issue, this nonsense would go away, and we could get back to solving real problems.