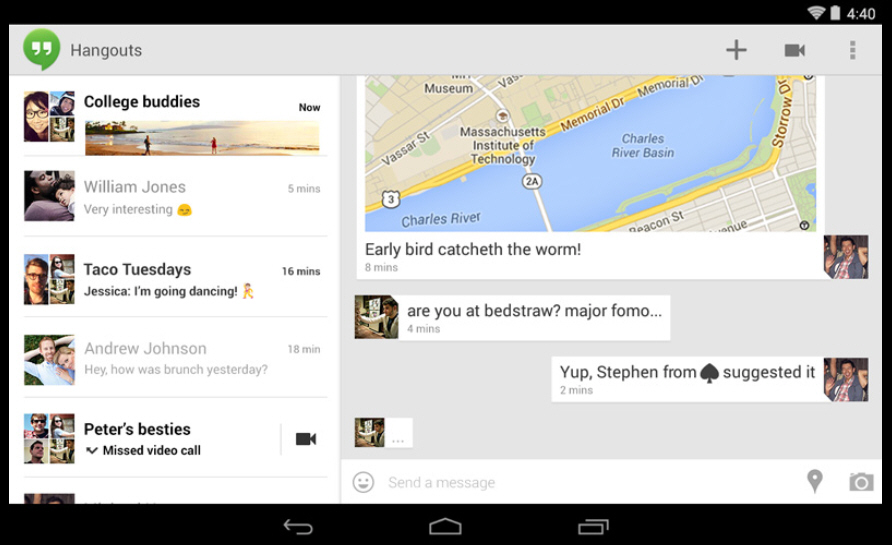 Google has updated its messaging tool for Android users with the release of Google Hangouts 2.0. The tool, which replaced Google Talk and Google+ Messenger as the de facto messaging service for Google users, gains support for SMS and -- on Android 4.0 and up -- MMS messaging, along with animated GIFs, location and mood status sharing.

The service, also available on iOS and computer via a Chrome browser extension, supports group video and voice calls as well as more traditional text-based chats and offline messaging. Version 2.0′s features were first mooted weeks ago, but have only now become publicly available to Android users for the first time.

By introducing support for sending and receiving SMS/MMS text messages, Google hopes that Hangout will become the user’s de facto app for texting, although only KitKat users have the opportunity to specifically set Hangout as their default SMS app.

Users can import existing text messages into the app, plus quickly switch between both SMS and Hangout mode as well as start group MMS conversations with contacts.

Support for attaching animated GIFs mean that users can now delight/annoy contacts in equal measure by posting such delights as animated birthday cakes, cute animals and even short videos, which play inline.

Users can now also share their current location in conversations by tapping the pin icon in the bottom right-hand corner of the app, which is then displayed as a Google Maps thumbnail within the conversation window. Also added is the ability for users to share the device they’re using, whether or not they’re on a call, plus their current mood.