Open letter to Tim Cook: Apple needs to be more like Google 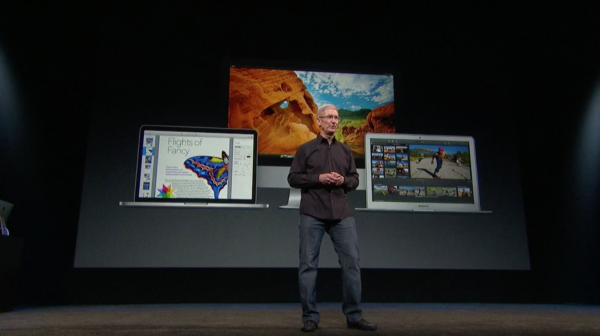 Apple has a big problem. The news media and technorati treat your company like Microsoft. Can you say "has-been?" For nearly 15 years, the company that Bill Gates built could do no right. Every seeming innovation met fierce criticism. Today, tongues wag about how Apple has lost its way under your leadership and how the days of innovation are over.

Stock speculators and analysts talk like Apple is dying, despite another amazing fiscal year -- $170.9 billion net sales, up from $108.2 billion two years earlier. That's stunning 60 percent increase. iPhone alone generated $91.3 billion revenue, up from $46 billion in fiscal 2011. Granted, overall income fell year over year from FY12, but how many other tech companies generate $37 billion net profit? Somehow, real-world performance is ignored by the masses. Sir, you have a perception problem, and as I harp so often: In business perception is everything.

You need to take lessons from Google, which public image transformed since Larry Page returned as CEO in April 2011. No tech company on the planet generates more positive perceptions about innovation and good feelings around its products -- qualities Apple has lost since you stepped into the role vacated by cofounder Steve Jobs. Google's public engagement is truly aspirational, showing people how their lives will be better for using its products. For years, I praised Apple for generating similar feelings through marketing and other means.

Google evokes the kind of enthusiasm Apple once strongly commanded and hasn't by any means totally lost. Your brand is strong but risks rapid decline, while Google's rises like a missile. Chris Matyszczyk's November 3 CNET story "How Google is beating Apple in the fight for emotions" is spot-on. He writes: "A company that once derided advertising as something beneath dwarf-tossing has embraced various facets of it, in order to make itself seem far warmer and more human".

For example, Google India's tear-jerker "Reunion" has nearly 2 million views since posting to YouTube two days ago. The video is the viral of the week. Other stand-out commercials: Nexus 7, "Fear Less"; Nexus 10, "New Baby"; Nexus 5, "I Do"; Chromecast, "Bigger Fun"; and my favorite -- perhaps because I have a daughter about the same age in college -- for Chrome, "Jess". They all are emotional first, showing people being happy or becoming happier while using Google products.

Commercials "Greetings" (iPhone 5c) and "Photos Every Day" (iPhone 5) are remarkably good and go the right direction but lack the interpersonal connections Google hits with higher emotional quotient. I used to joke that when Jobs had an off-day new product keynote, people left feeling their lives would be better for buying the new thing. But when he was on, they felt like their lives would be worse if they didn't get the new thing -- and right away. That's missing today, while expectations remain Apple must constantly reinvent rather than refine.

I sincerely offer some suggestions:

Make feel-good marketing a priority. Change starts at the top. I see you as a logistics genius, Mr. Cook. No tech company operates a tighter global supply chain, something else Apple critics ignore. But this marketing thing isn't working. The emotional quotient is too low. I long compared you and Steve Jobs to Spock and Captain Kirk -- highly logical offset by emotional insight. Kirk and Spock are a great team, but alone -- well...

You need someone more emotional -- and yes, marketing head honcho Phil Schiller is good start -- who can lead you in the right direction. Logic doesn't sell products. Feelings do. You have a great, feel-good brand. Inject it with vitality.

For all Apple aspirational marketing success, the focus too long is on empowering individuals. Google's brand boom is about empowering people. That's the quality your product marketing lacks, even during the Jobs era.

Stop keeping secrets. Let's be honest, and I don't expect you to publicly agree, Apple's longstanding practice of keeping products hush-hush was about Jobs' ego -- so he could parade something remarkable and glow in the audience's reactions. There's no place for secrets during the Tim Cook era. Your supply chain is too large. You can't long keep product development under wraps, as rumors about iPad Air and iPhone 5s and 5c clearly show. Yes, software stuff is easier to shroud, but hardware -- forget it.

So don't try to keep secrets. Leak like a sieve. Let rumors about the next thing infect potential new and existing customers with anticipation and doubt about buying something else when they could be rewarded by waiting. Rumors are free marketing. You know this. You just have to let go past practices.

Better promote iterations. Your product names and descriptions are excellent, as I first observed nearly a decade ago. But rivals like Google and Microsoft have finally caught on. Chrome is good example. The name's connotations are shiny and new, and Google lives up to them by updating the browser roughly every six weeks. That's a problem. Rivals match your marketing but seemingly innovate faster. You must change perceptions, by delivering speedy iterative improvements and aggressively promoting them.

Expectations are Apple will do something big, yet look how much brand bang Google gets from doing small things. There, your approaches aren't so different -- just how they're exposed and perceived. For example, I get where you're going with iPad and iPhone. You're setting up for something bigger, laying foundation with 64-bit A7 architecture and iOS 7's flat design. As I asserted in my iPad Air review, sometimes evolution is revolution. But there's problematic public perception that if Apple doesn't release something remarkably different, new products aren't innovative. Reality: Innovation through refinement is harder, particularly for a built-up market where so much is invested.

Google refines and releases, then promotes. You improve but don't tell people why iteration-this or iteration-that will make their lives better. Please, Mr. Cook! Put aside Jobs' showboating ways -- the big event to show off new things. Give people a new thing and tell them about it. New iOS 7 update is out -- how is it juicy? You can let the Internet rabble babble, or you can control the message. Treat every iteration as newsworthy.

Engage and influence. For far too long, Apple has played favorites among the tech blogger and journalist community. Some people get early access to products and others immediate review units, while the rest are left out. Hello, Mr Cook! Enthusiasts and influencers provide invaluable free marketing. You want them babbling about your stuff and using it every day.

Favoritism is another Jobsism. Dispatch this ego anachronism to oblivion. I recall the May 2001 opening of the first Apple store. Jobs showed off the shop personally to journalists but followed around esteemed tech writer Walt Mossberg like a puppy seeking approval. You need approval of the many, not the few, sir.

When Google announces new hardware, bloggers and journalists request review units from a webpage. Delivery is quick, and the search and information giant benefits from lots of posts -- as writers scramble to beat competitors to the publish button.

Surely you understand that bloggers and journalists watch one another and compete, resulting in feeding frenzies around some topics. There's also unwritten pressure to conform. If a majority starts writing about how innovative Apple is or is not, mob mentality sets in. Ask anyone at Microsoft what happens when mob attitudes about lacking innovation turn to cement. Thereafter, a company can do no right.

Engaged marketing is cheap, if done well. Look at Google's HP Chromebook 11 giveaway contest, which is brilliant. Too bad fiery chargers spoiled some of the fun, though. But the concept sings: Nominate someone to win the laptop. Happy winners are a noisy bunch, giving Google oodles of free advertising about how great are cheap Chromebooks.

If, as the rumormongers contend, iPhone 5c isn't selling so well, do a fast-delivering contest like Google -- announcing winners every day. Customer goodwill is priceless marketing as the happy winners praise Apple. The point: Learn from Google and actively engage.

Mr. Cook, I'm just a lowly journalist and no MBA advisor. But no rocket science degree is needed to see that Google geeks shame Apple artists when it comes to making people feel good about the products.

48 Responses to Open letter to Tim Cook: Apple needs to be more like Google