You may not want that Windows Bay Trail tablet after all 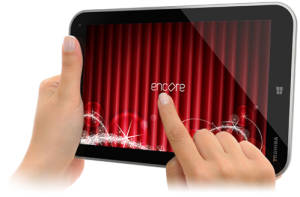 An old friend has been telling me for months that the future of personal computing was coming with new Windows tablets using the Bay Trail system-on-chip architecture built with Intel Silvermont cores. Silvermont is the first major Atom revision in years and is designed to be much faster. Bay Trail would lead to $199 8-inch Windows tablets while also fixing the limitations of Intel’s previous Clover Trail. Well Bay Trail units are finally shipping but my techie friend is sorely disappointed with his.

The lure of this platform for Intel is great. Manufacturers could use the same chassis and chipsets for everything except gaming boxes and servers. Eight inch tablets, ChromeBooks, Ultrabooks, 10-inch tablets, and netbooks, all one chassis with up to 4GB of RAM and a 256GB SSD. One size fits all for home, car, travel, and work.

That’s the dream, but here’s the reality, at least so far. While the first Bay Trail tablets have the important features of SD card, HDMI, USB, and GPS, most of these are hobbled in one way or another.

In the units shipping so far from Dell, Lenovo, and Toshiba (my buddy has a Toshiba Encore), if you are charging you can’t use the single USB port for anything else. This means it can only be used as a workstation on battery power. It can only play a DVD movie from battery. This is dumb.

And not just any USB cable will do for charging. These tablets will only charge if they sense that the USB data lines are shorted so accessories cannot be connected. Even worse, if it’s charging you can’t use the tablet for anything, so no keeping it plugged-in at your desk or as a kiosk. My friend’s charger that does this has a Windows logo on it so this has to be deliberate hobbling by Microsoft. Way to go!

Accessory companies are reportedly working on a modified hub or Y-cable with a switch and a 1.8k resistor but that is not only a kludge, it could cost them their Windows certification.

And while these devices have "GPS", it’s not like you think. Most of these tablets are using the Broadcom 4752 GNSS chip and the driver provides only the location, date, and precision information, not the raw satellite information. Worse, it provides information to the Windows Locator Service only and not in the industry standard NMEA serial data stream through a virtual com port required by Windows programs like Microsoft Streets and Trips or Delorme Street Atlas.

A company called Centrafuse makes a program called Localizer to fill this gap but that also adds $15 to the cost. The bigger problem is very few consumers will even know there is a gap… until they are in their cars and lost.

This platform appears to have real potential yet Microsoft -- not Intel -- has deliberately hobbled it. Why? I’m guessing there’s another version coming for a little more money that will unlock these features, making them more usable.

But not in time for this Christmas.