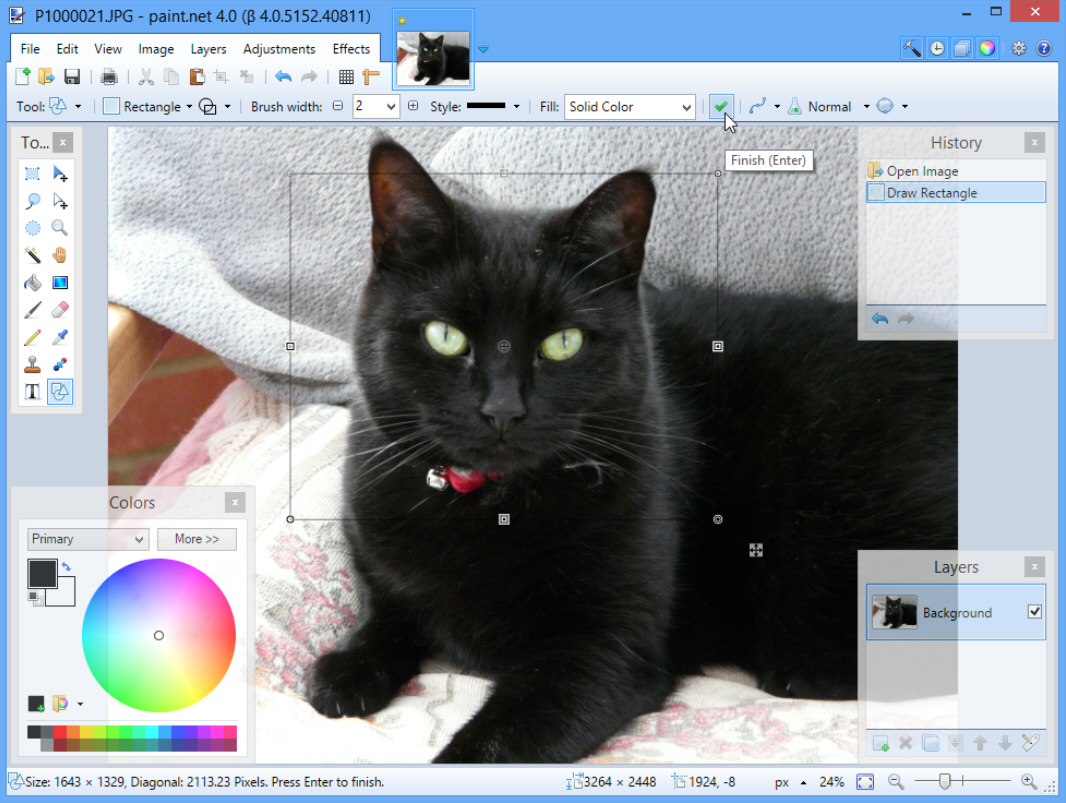 Less than two months after unveiling the first alpha, dotPDN LLC has released the first beta of Paint.NET 4.0. Version 4.0 comes with a rebuilt rendering engine, improvements to various tools and a tweaked user interface, and while the beta is primarily a bug-fix release it does introduce a couple of major tweaks.

The first change gives users a choice of color scheme -- light or blue -- via the program’s Settings dialog. The default depends on the version of Windows currently being run -- light in Windows 8, blue in Windows 7.

Another significant improvement is the addition of a commit button -- shown as a green check mark -- to the toolbar. This works with most non-brush tools, including move, gradient and magic wand, and is designed to simplify the process of completing one task -- such as drawing a shape -- and then moving on to another one.

Other improvements include scaling the icons found in the top-right of the Paint.NET window correctly for high-DPI displays. The dangling Tool: tooltip found on the Tool selection button has been removed, while users can now cancel shapes by pressing the [Delete] key.

The update also includes a large number of fixes for crashes and performance-related issues, which are outlined in detail at the paint.net blog.

Version 4.0 will represent a major departure from version 3.5.11 on its final release -- a completely rebuilt rendering engine is both asynchronous and multi-threaded for improved performance, although users will need a PC with dual-core processor to run it.

The user interface has also been redesigned, with tools moved from the menu bar to a new top-right hand panel on-screen. Version 4.0 also comes radically revamped, improved and new tools across the board, from more visible selection outlines to a new all-encompassing Shapes tool containing 29 shapes previously split across various other tools.

The usual warnings about using pre-release software apply: don’t rely on the program for day-to-day use and work on a duplicate copy of images.

Paint.NET 4.0.0 Beta build 5152 is available now as a a freeware download now for dual-core (or better) PCs running Windows 7 or later. The .NET Framework 4.5 is also required, but will be downloaded automatically if not present.  Also available is Paint.NET 3.5.11 for Windows XP or later.