So Pat McGovern comes into a bar… 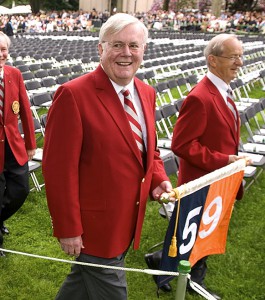 Pat McGovern died this week at 76 in Palo Alto, totally surprising me because I didn’t even know he had been ill. Uncle Pat, as we called him, was the founder of Computerworld back in 1967 and the year before that research firm International Data Corp., started in his suburban Boston kitchen. Pat helped turn the computer business into an industry and employed a lot of people along the way including me. He was an exceptional person and I’d like to tell you why.

Pat ran a company that published about 200 computer magazines all over the world. Each December he traveled the globe to give holiday bonuses to every employee he could find. The bonuses were a meaningful amount of crisp cash money in an envelope that Pat would hold in his hand until he’d finished his little speech about how much he appreciated your work. And here’s the amazing part: he knew what we did. He read the magazine, whichever one it was, and knew your contribution to it. You’d get a smile and a handshake and 3-4 sentences about something you had written or done and then would come the envelope and Pat would be on to the next cube.

This by itself is an amazing thing for an executive to do -- traveling all month to hand out 3000 envelopes and doing it for more than 30 years. Does your CEO do that?

When I was fired 18 years ago by InfoWorld Pat knew about it. It was a big enough deal that someone told him and he didn’t stop it because he trusted his executives to do the right thing. But when it became clear after months of rancor and hundreds of thousands in legal bills that it hadn’t been the right thing Pat and I met in a hotel suite in New York, hand wrote an agreement and he offered me back my old job.

I couldn’t do it, but we stayed in touch. Pat invested in a startup of mine (it failed). He made a stalking horse offer for my sister’s business getting her a better deal in the process. He always took my calls and always answered my e-mail. And when he did he always threw-in 3-4 sentences to show that he had been reading or watching my work.

We weren’t close by any means, but we respected each other.

There is something important in this about how people can work together, something I hope you find today in your organization. I never worked for Pat McGovern. I was always down in the engine room, shoveling words. But Pat knew about the engine room, understood its importance, and realized that the people down there were people and he ought to try to know them. The result was great loyalty, a better product, and a sense of literal ownership in the company that I retain today almost two decades later.

It wasn’t perfect. The guy let me be fired! But he was the only one who ever apologized for it and that takes a big man.