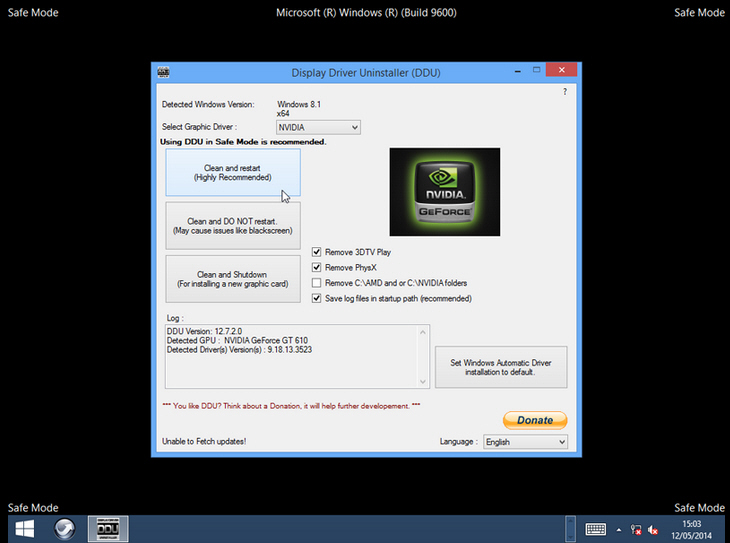 Windows PCs are messy beasts at the best of times, with uninstallers leaving great swathes of program files and Registry entries behind. The complicated way that programs and hardware is tied in with Windows can have more serious repercussions too, should you suddenly find your graphics card not working properly and the installer refusing to play ball.

It’s at times like this you need a tool that can thoroughly remove the driver and all traces of the other paraphernalia installed. Thank goodness, for the clearly labeled Display Driver Uninstaller.

Display Driver Uninstaller, which requires no installation, currently works with NVIDIA, AMD and Intel graphics chipsets, although it’s worth pointing out that Intel support is still in its infancy. It does two basic things: removes the current display driver and all previous versions archived in the Windows Driver store, and deletes all associated programs, services and Registry entries from NVIDIA and AMD.

The idea is, the tool basically returns your PC’s graphics to the state it was in after a fresh Windows install. You can then download the latest or most reliable working version of your drivers and install them from scratch.

The tool itself is refreshingly simple to use -- it works best, of course, in Safe mode, and can automatically boot you into Safe mode and then return you to normal mode after cleaning up your system.

You have three choices: remove and reboot, remove and do nothing, and remove and shutdown, the latter perfect for those wishing to dump all vestiges of their old graphics card before installing a new one.

We tested it on a perfectly working system with NVIDIA graphics and it worked flawlessly -- the key thing is that it shreds most (if not all) traces of the driver and associated software, which could be critical on a machine where the installation has become corrupt and the built-in installer is powerless to act. But don’t forget to take a System Restore point before you begin -- just in case.

Display Driver Uninstaller 12.7.2 is available now as a freeware download for PCs running Windows (XP up to 8.1) with .NET Framework 2.0 or later installed.