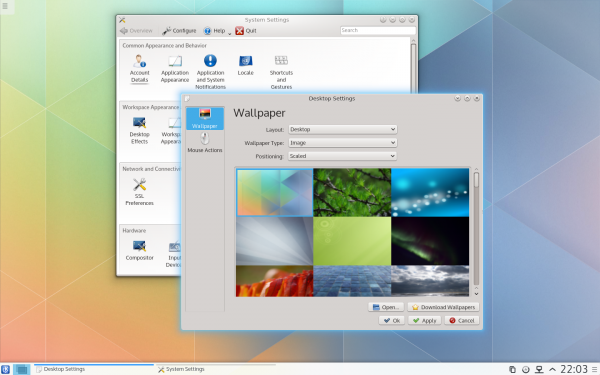 If you have a decent computer and you are interested in dabbling in Linux, KDE is where you might want to start. You see, there are many desktop environments for Linux, but Windows users would probably feel most comfortable in KDE -- it resembles what they are used to, with things like a start button and menu.

Beginners aside, advanced Linux geeks use KDE too -- it is powerful, beautiful and well designed. Today, KDE releases the first beta of Plasma Next and is looking for testers and feedback.

"The Plasma team would like to ask the wider Free Software community to test this release and give any feedback. Plasma Next is built using QML and runs on top of a fully hardware-accelerated graphics stack using Qt 5, QtQuick 2 and an OpenGL(-ES) scenegraph. Plasma Next provides a core desktop experience that will be easy and familiar for current users of KDE workspaces or alternative Free Software or proprietary offerings. You can find more details on the upcoming Plasma Next release in the alpha release announcement. Plasma Next is planned to be released in early July", says the KDE team.

The team further explains, "the workspace demonstrated in this pre-release is Plasma Desktop. It represents an evolution of known desktop and laptop paradigms. Plasma Next keeps existing workflows intact, while providing incremental visual and interactive improvements. Many of those can be observed in this technology preview, others are still being worked on. Workspaces optimized for other devices will be made available in future releases".

Of course, as this is a beta, you should avoid using it on a production machine. The KDE team discloses the following known issues:

If you are interested in testing, but do not want to risk ruining your computer, no worries. You can run a live environment off a DVD, by downloading and burning the ISO here.

Will you test it? Tell me in the comments.