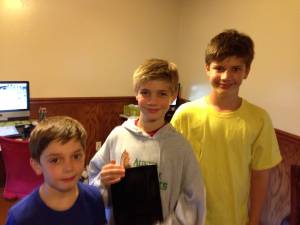 My three sons share an Apple iPad given to them by Mimi, their grandmother. When she bought it a couple years ago the iPad was top-of-the-line with 64 gigs and a Retina display. The boys run it hard on car trips where it functions as a hotspot and under covers in their bedrooms along with a couple iPhones, iPod Touches, various Kindles and some cheaper seven-inch Android tablets.

In all we have probably a dozen touchscreen devices in the house but most of the action takes place on iPhones or that one iPad. Great for Apple, right? Not really. Apple’s iPad sales are dropping you see and the reason nobody seems to talk about is they don’t wear out.

The rule of thumb in personal computers is there is a new generation every 18 months and regular users aren’t willing to keep the same machine going for more than two generations so our median PC replacement time is about three years. Mobile devices don’t typically last as long with manufacturers and carriers planning for a median 18 month replacement cycle. This is in part driven by cellular contracts (or has been) but battery longevity comes into it, too. And of course the state-of-the-art in mobile phones has been increasing so rapidly that 18 months is about right for everyone except me.

While a 10-inch iPad is more expensive than a high-end cellphone it isn’t dramatically so, especially with the decline of mobile contracts. Apple and the carriers originally expected iPads to last about as long as phones or maybe a little more. But they don’t fail that quickly. At best (or worst depending who you are) iPads may follow a PC three-year replacement cycle. But they haven’t been around long enough to really test that so the big fear at Apple is they’ll last even longer than PCs.

My kids have never run out of memory with the iPad despite all the crap they load on it. Battery life remains acceptable especially since they’ve learned to keep it plugged-in during long car rides sucking movies down from a Seagate Wireless Plus media server. Mama fills the Seagate box with movies grabbed from Netflix and our Dish DVR, keeping cellular data consumption to a minimum. Without the Seagate box my kids consume a gig of cellular data per kid per day, which sorta staggers the old phone bill.

This unexpected iPad longevity has hurt Apple recently with Wall Street. Traditionally they’ve handled such problems by introducing new models and they’ll do the same again shortly. Only this time it might not be enough. In fact I’d bet that it won’t be enough because I have a hard time imagining what would make me replace our iPad. Apple has an iPad trade-in program to get older units off the street in the USA and put them on the street as refurb units priced for third world markets like Vietnam.

If that doesn’t stimulate enough demand Cupertino may be tempted to make earlier iPads deliberately obsolete with new versions of iOS. I hope they don’t but it won’t surprise me -- an act of desperation from a company surprised by its own product longevity.