China brands Windows 8 a threat to its national security 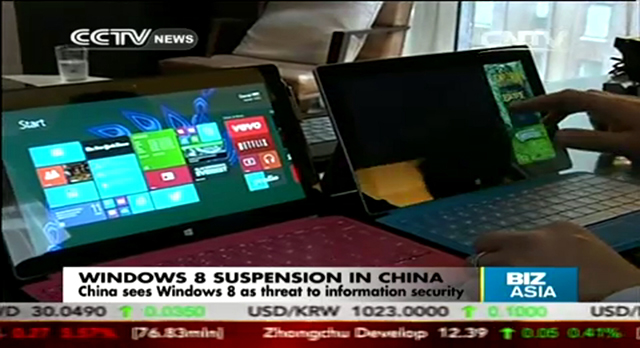 It’s fair to say China isn’t a fan of Windows 8. A few weeks ago, the tiled OS was banned from Chinese government computers, as part of a notice on the use of energy-saving products (if this sounds a bit vague, that’s because the reason given is).

Then, if that wasn’t bad enough news for Microsoft, a state-backed news report broadcast on China's CCTV has really put the boot in, branding the operating system a threat to China's cybersecurity, and suggesting it is being used to spy on Chinese citizens.

In a telephone interview, Prof Yang Min of Fudan University stated that the closed nature of Windows 8 posed a threat to the nation's cybersecurity efforts.

"Microsoft would no longer open its Windows 8 source code to the Chinese government," he said. "However, the security scheme of the operating system is designed to provide better access for Microsoft to users' database. For China it’s a big challenge on our information security".

Ni Guangnan, an Academician of the Chinese Academy of Engineering told reporters, "Your identity, account, contact book, phone numbers, all this data put together can be used for big data analysis. This analysis could be more accurate than our official statistics".

China believes the NSA is using Windows 8 to gather data on its citizens and transmit the details back home. "The data might be a good way for the US to monitor other countries," Guangnan warns.

Microsoft is reportedly working with the Chinese government to allay its fears, but things don’t look good for Windows 8. Guangnan claims, "China has set up an office to study cybersecurity and information technology in order to create our own operating system that solves the problems we are concerned with”.

You can watch the full report (in English) below: