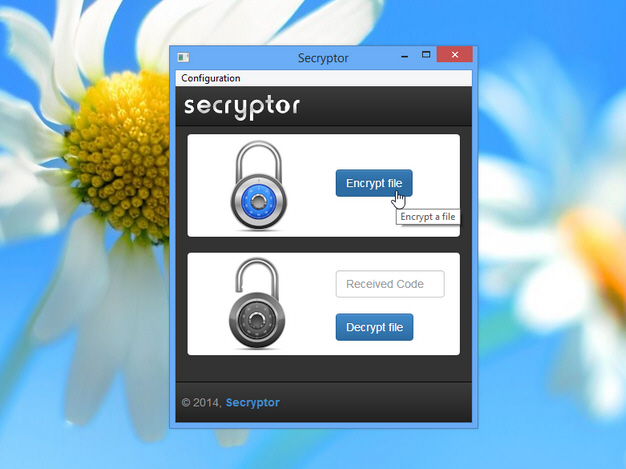 Privacy’s a big thing nowadays, and with the US government in particular leaning on big businesses to make it easier for user’s private data to be shared, you’ve a right to feel uneasy. Whether you’re looking to encrypt files on your PC or even add another layer of encryption to files before uploading them to the cloud or sharing via email, a raft of free tools are emerging to help you do just that.

One of the latest to hit the market -- albeit in somewhat unfinished form -- is a free tool for Mac and PC called Secryptor Basic 1.0.

Secryptor offers a relatively simple tool for encrypting and decrypting files using 256-bit AES encryption. At its most simple level, you select a file from your hard drive, add a password and Secryptor will produce an encrypted copy, sporting its own .skt file extension.

That on its own isn’t particularly remarkable -- tools like Quick Crypt do the same, and much more besides. However, Secryptor does have some additional tricks up its sleeve to tempt you. The first is the free companion iOS app that allows you to download, decrypt and view content on your iPhone or iPad.

The second is direct integration with Dropbox, allowing you -- in theory -- to directly encrypt and upload files to your Dropbox folder. From here, Secryptor generates an ID code you can email to a trusted contact (communicate the password separately) who can then easily recover the original file using Secryptor’s decryptions tools.

We say "in theory" because while the feature works flawlessly on PC, we had problems using it on the Mac -- this could be down to the fact the program still feels unfinished, despite its 1.0 release status. The Windows setup file is all in German, while the Mac versions continues to use German on dialog boxes even after you’ve switched language to English.

Even in its early state, however, Secryptor shows promise, particularly for those with Dropbox accounts and the need to securely access files via iPhone or iPad. However, PC users should also check out the aforementioned Quick Crypt and AxCrypt, to name but two alternatives, to see which one best meets their needs.

In the meantime, Secryptor Basic 1.0 is available now as a free download for PCs running Windows 7 or later as well as Mac and iOS. An Android version is also due imminently.