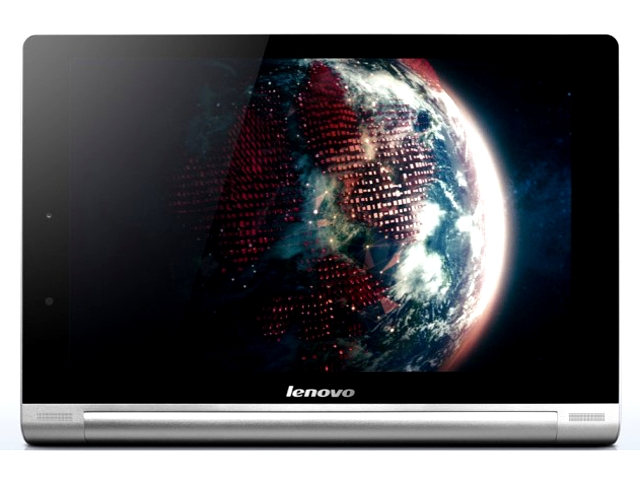 Last year Lenovo extended its Yoga line to cover not just the company's rather clever folding hybrid Windows laptops, but Android tablets too. The designs weren't quite as ingenious as the IdeaPad Yoga, with its keyboard that flipped nearly 360 degrees to sit flat against the back of the display, but it still had a unique selling point (USP): A brilliant flip-out stand which could hold the tablet either tilted or upright.

It was a fabulous concept, but spoilt by a dated specification. The screen was a bog standard 1280 x 800 resolution effort, and the processor a lowly Mediatek quad-core CPU. Now, however, Lenovo has come back with the Yoga Tablet 10 HD+, enhancing the previous model with a full HD 1080p screen and a Snapdragon S400 SoC. Is this enough to make a great tablet from a great idea?

The Yoga's design might be odd, but it's more practical than you might think. The actual tablet is fairly thin, with a cylindrical bulge at the bottom to accommodate the stand, then it slowly tapers off towards the upper edge. With the stand folded in the bulge makes a comfortable grip, particularly if you're holding the tablet in portrait mode – which the position of the webcam encourages you to do. It's relatively light at just 626g, and it feels a bit like you're holding an A4 notebook or magazine. I could gripe about the unfashionably wide bezel or the cheap-feeling silver plastic back, but generally this is a solid, slim and well-designed tablet with an interesting USP.

That USP remains the stand. Grab the bulge, twist it and fold the stand all the way out and your Yoga sits up at a near-vertical angle, ideal for watching or -- with a Bluetooth keyboard -- doing some work. The hinge also allows for less vertical angles, though there comes a point where the tablet becomes unstable on the desk. You can also turn the tablet the other way around, and use the stand to prop it up at a roughly 30 degree angle. It's great for situations where you're looking down at the tablet, like when you use a seat-back table on a plane or train, and it's also good for typing with the onscreen keyboard. 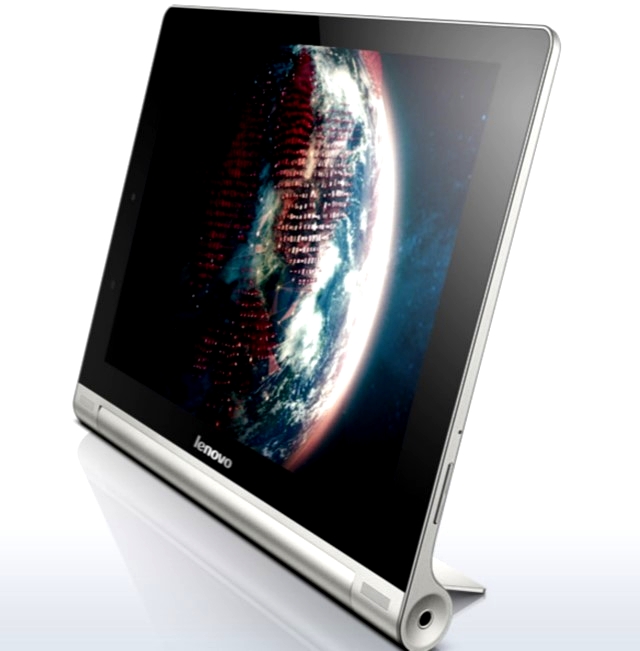 I've regularly used an Android tablet with a Motorola Bluetooth keyboard as a makeshift laptop while away at conferences or events. In the past this has meant carrying a separate folding stand or using a folio case with one built-in. With the Yoga, all you need is the tablet and the keyboard, and that's it; you can work. True, it's not as neat a solution as Microsoft's Surface, but it's close.

The one drawback of the design is connectivity. You get a microUSB port for charging on the left-hand side and a headset socket on the right-hand side, but there's no HDMI output or anything else obvious. Look inside the recess where the stand is normally concealed, however, and there's a flap covering a microSD card slot. With just 16GB on the base model, you'll probably need it. And there is, of course, 802.11n Wi-Fi, Bluetooth 4.0 and A-GPS built-in.

The new, improved screen is a massive boost for the Yoga 10 HD+. It's a 1920 x 1080, full HD IPS display, and while it's not going to give the screens on the iPad Air, Sony Xperia Tablet Z2 or Samsung Galaxy Tab Pro 10.1 much competition when it comes to color or crisp detail, it's still bright and punchy, with good viewing angles. Text is smoothly rendered but sharp against the page, while photos and video look vibrant, though it can be hard to make out too much detail in areas of shadow. The surface is also highly reflective, making it a little tricky to see in bright light without the brightness ramped up most of the way. 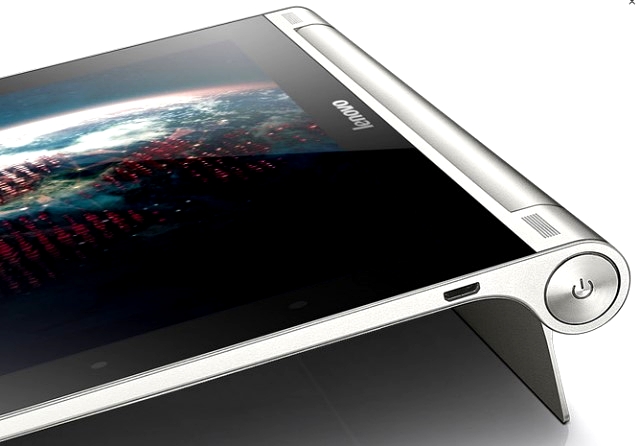 Lenovo has set up display presets for the tablet, which kick in automatically while in stand, tilted up and handheld portrait modes (though you can switch between these manually using a special Sound and Visual menu). Stand mode seems to boost color and contrast while the handheld mode, called Hold, adds a slight ocher tint for easy reading. I'm not sure either setting really works that well, and I prefer the more natural default appearance, but the choice is yours.

It's rare that we find a tablet that actually sounds good, but the Yoga Tablet 10 HD+ tries harder than most with dual front-firing speakers above the bulge and built-in Dolby processing. To be honest, the results aren't amazing even with the intelligent equalizer and virtual surround options turned on, but there is more depth and a wider stereo spread than you'll get with many tablets. It's adequate for watching movies, though we'd still recommend plugging some decent headphones in.

The Yoga Tablet 10 HD+ comes running Android 4.3, but Lenovo has added its own UI enhancements on top. Mostly it's a case of widgets and app icons, with apps spread across multiple screens rather than concentrated in a central app tray. There's also a quick-launch sidebar which you can swipe in from the right of the screen, giving fast access to settings and core apps. Beyond this, Lenovo has installed custom icons for the basic Android browser and email apps, and installed an eBook reader, Kingsoft Office, the Route 66 SatNav package and an additional browser – UC Browser HD. There are also a few Lenovo applets for synchronizing content, sharing files wirelessly with other Lenovo tablets users, and managing connections, web advertising and installed apps. 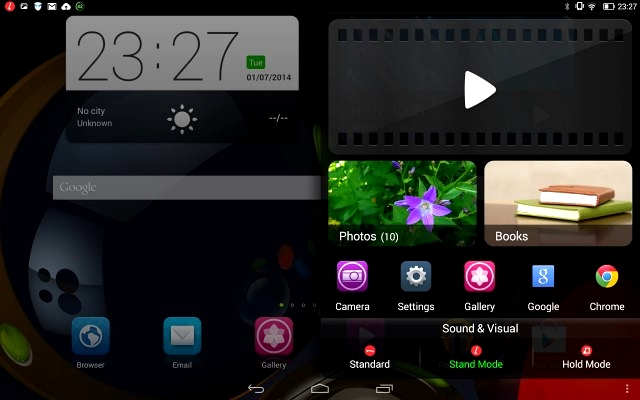 I'm not keen on some of these so-called improvements. I think a separate apps tray with favorite apps on a few home screens is more efficient than putting everything on several home screens, and Lenovo seems to have caught a mild version of Samsung's doubling up obsession, where three browsers is somehow better than one. It wins points back, however, for installing an electronic user guide, and these complaints aren't so serious that you can't fix them with a little judicious tweaking.

The first Yoga 10 had a MediaTek MT8125 quad-core processor, running at 1.2GHz. It was just about fast enough to run Android fairly smoothly with a few apps open, but woe betide you if you tried to run anything too demanding, let alone start playing more advanced 3D games. The Yoga Tablet 10 HD+, however, comes packing a Qualcomm Snapdragon 400, running at 1.6Ghz with 2GB of RAM.

It's a common processor for cheaper smartphones -- including Motorola's Moto G -- but still no powerhouse, particularly when running 3D apps at full HD resolution. For most purposes, though, it's perfectly acceptable. The Sunspider 1.0.2 benchmark zips by in a credible 1273 milliseconds, while the Geekbench 3.0 multi-core score of 1486 is up there with the high-end tablets of eighteen months ago, including the Samsung Galaxy Note 8.0 and Nexus 10. Basically, it feels snappy in everyday use, and it's only once we got to GFXBench's T-Rex HD test that a rather painful 5.6fps average frame rate let the tablet down. If you want to play games, best stick to the likes of Angry Birds. 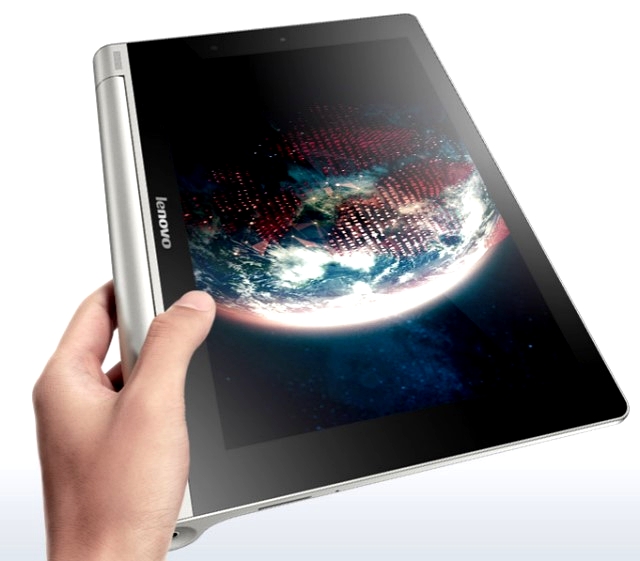 The Yoga Tablet 10 HD+ comes equipped with an 8 megapixel rear-facing camera and a 1.6 megapixel webcam. The first is positioned rather oddly on the bulge at the left-hand side, so you have to be careful not to stick a finger over it while holding the tablet in landscape mode. The pictures it takes have a bit more detail than you would normally expect from a tablet snapper, but colors are crudely rendered and there's precious little dynamic range. The front-facer, however, is distinctly above average. There's noticeable noise, but the overall quality, even in fairly low light, is more than passable for making video calls. 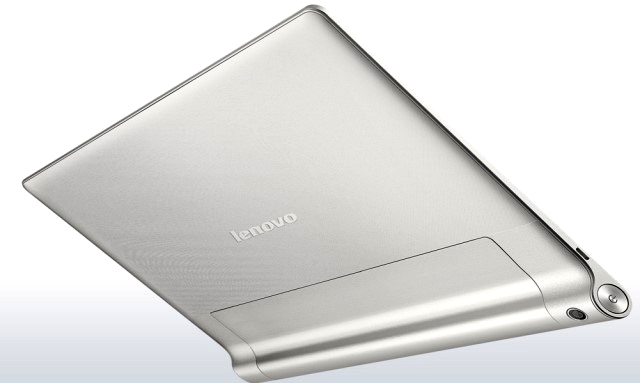 Lenovo also surpasses expectations when it comes to battery life. It claims that the 9000mAh Lithium Ion cell can power the Yoga Tablet 10 HD+ for up to eighteen hours, and in practice we've been impressed. It easily gets through three days of light to medium use, and doesn't seem to drain when it's set to sleep. Streaming an hour of HD video used up less than 6 per cent, so there's plenty of capacity to cover a transatlantic trip.

It's not as fast or glamorous as the iPad Air or Xperia Tablet Z2, nor as packed with business features as the Samsung Galaxy Tab Pro 10.1. Yet the Yoga Tablet 10 HD+ stands out as a practical, affordable tablet with a good screen, a useful stand and excellent battery life. It could do with a bit more speed and ditching a few software "enhancements", but the stand and the long-life battery are both good for business, and enough to lift it beyond the average Android slate.