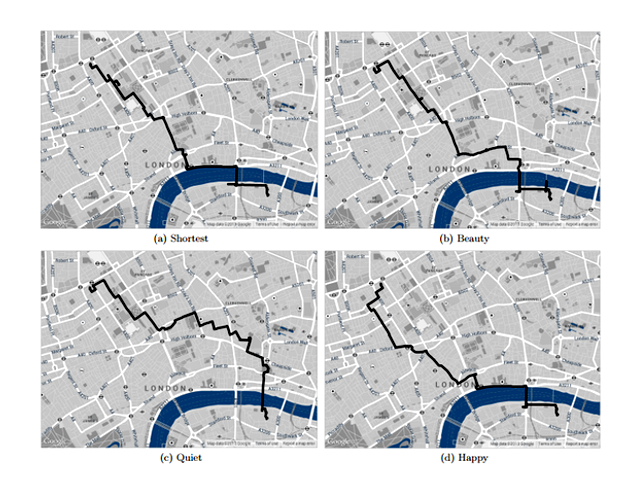 Yahoo has developed a GPS algorithm that allows users to select a route based on how beautiful it is, instead of time or distance.

Yahoo Labs and the University of Torino conducted the Shortest Path to Happiness study in order to offer "emotionally pleasant" routes to users.

To determine which routes were the most "beautiful, quiet and happy," researchers used website UrbanGems, where users are asked to rank photos of London and Boston based on how aesthetically pleasing they are.

Based on votes from over 3,300 members of the site, looking at more than five million images of the two cities, the mapping algorithm generates alternative routes not determined by traditional factors such as distance or time.

"Based on a quantitative validation, we find that, compared to the shortest routes, the recommended ones add just a few extra walking minutes and are indeed perceived to be more beautiful, quiet, and happy," the study claims.

Yahoo's research is in sharp contrast to most mapping services, which focus only on the shortest routes.

For example, Google recently updated its Maps service to allow users to more accurately measure the distance between two or more locations.

While Yahoo's alternative routes are currently only available in Boston and London, the company stated that it would be looking to extend it to other US and European cities.

The firm did not confirm whether the new mapping algorithm would feature in any of its products, but the report did refer to its potential use in a smartphone app.