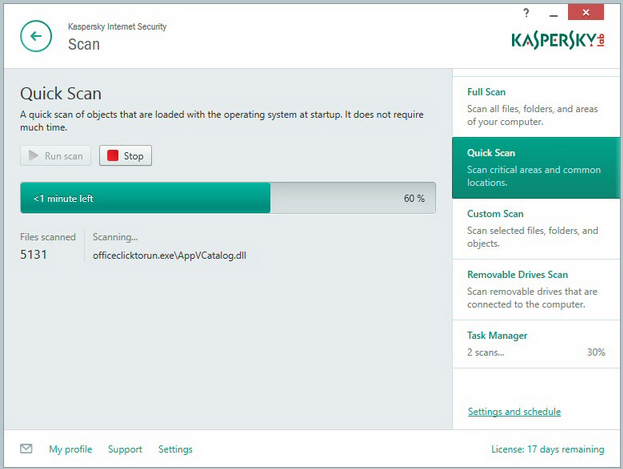 Kaspersky Internet Security 2015 is a capable product which delivers everything you’d expect from a security suite: antivirus, firewall, browsing protection, a spam filter and more. The technology scores highly with the independent testing labs, too, so we were interested to see what the new build had to offer.

Installation was quick and easy. Unlike some of the competition, you’re not forced to remove anything else vaguely security-related: Kaspersky warns you about possible conflicts, but whether you uninstall any problem programs is up to you.

The interface looks a little different to previous editions -- lighter, more subdued -- but it feels very similar. Four large buttons give access to key areas (Scan, Update, Safe Money, Parental Control), and links give one-click access to your settings and a list of other tools. It’s all very straightforward, and even newcomers to Kaspersky should quickly find what they need.

We did have a few issues with the initial setup, with for example our spam filter being turned off by default. Fortunately this wasn’t difficult to spot, or fix: click Settings > Protection Center, every protective layer is listed, and you’re able to disable or enable them with a click. It only took a few moments, and we were ready for testing.

Kaspersky cloud-assisted antivirus technology is highly rated by independent testing labs, and it’s not difficult to see why. As we write, AV-Test’s latest reports show the Kaspersky 2014 detecting 100 percent of both common and 0-day malware. AV-Comparatives’ Real-World Protection Test for March-June 2014 wasn’t quite such a success -- Kaspersky "only" blocked 99.5 percent of threats -- but that was still enough to place it 5th out of 22.

The package also scored very well in our own, much smaller tests. We collected malware samples from emails, infected torrents and newsgroup files, and from recently-reported malicious domains. Almost everything was eliminated before it had a chance to cause any damage. A single sample remained, but even that turned out to be our fault, not Kaspersky’s: close inspection revealed it wasn’t actually malware, after all.

We weren’t quite so happy with Kaspersky’s handling of archives, as it doesn’t scan their contents. We could download infected archives without issue. Our system wasn’t compromised, as any malware was eliminated just as soon as we extracted it. But there’s no way to scan the archive on demand, perhaps if you want to send several zips to someone else (right-clicking and selecting "Scan for viruses" reports "no threats detected"). And although the program claims to scan outgoing attachments by default, we were able to email malware in zip files to another account without any problem.

Still, in terms of protecting our system, Kaspersky Internet Security 2015 did very well. It’s easy to use, highly configurable, had only an average performance effect on our PC (boot time was around 20 percent longer), and detected and removed everything we threw at it.

Kaspersky’s latest now offers some protection from "camfecting", illicit attempts to access your webcam. The Application Control module warns you if an untrusted program tries to connect, and nothing will happen unless you give permission.

While this sounds great, it’s difficult to achieve, and Kaspersky says it’s only supported on 10 webcam models (5 Microsoft, 5 Logitech). We found it also worked on a generic third-party product, but there are no guarantees, and the protection is limited anyway (there’s nothing to stop an application accessing only audio data).

More interesting is the brand-new protection from Cryptolocker-type malware. Kaspersky’s System Watcher now looks out for suspect programs trying to modify user files, and backs up the originals. If the program is found to be malware then not only will it be removed, but your documents will be restored, too.

There are limitations here. In particular, backups will be deleted when Kaspersky is closed, so if the malware isn’t identified immediately then at least some files will be lost. Still, it’s a welcome extra touch, and while we couldn’t test the system properly, a very brief look suggests it works as described.

Firewall tweaks mean that Kaspersky can optionally block the transmission of non-encrypted passwords when you’re using Wi-Fi. It will also detect and warn you of vulnerabilities when you connect to a Wi-Fi network, apparently, although we’re not clear what’s covered.

Detecting malware is good, but it would be better to avoid it in the first place, and Kaspersky offers several protective layers to try and make that happen.

The URL Advisor adds icons to search engine results, highlighting the safety of each link. This delivered much better results than last year, with many more sites recognized, but there are still problems. We regularly found links which had no icon at all, not even the gray "no information" graphic.

The antiphishing layer is vastly more effective. Enter a link in your browser, click something in an email and Kaspersky checks it for safety, comparing the URL against a database and analyzing its content, and blocking anything dubious. In our tests this was 80 percent accurate, very impressive, and trampling all over most of the competition.

There’s very little to say about the firewall. And that’s a compliment, not a criticism. It just got on with blocking every form of attack we tried, without ever displaying a prompt or requiring any intervention or help.

Kaspersky’s other big web feature is Safe Money, a secure isolated browser for your online payments. Click a link to PayPal, say, and the page can automatically open in Safe Money, which uses various tricks to prevent other applications from intercepting your details. We tested it with three commercial keyloggers, and sure enough they weren’t able to capture anything we did online. (Kaspersky’s separate Virtual Keyboard uses similar keylogger-blocking techniques elsewhere, if you need them.)

Kaspersky Internet Security 2015 installed a spam filter on our test PC. While it was disabled by default, the tool delivered very acceptable results once we turned it on, blocking 71.6 percent of our test junk. That’s down on last year, but comparisons are difficult, as spam detection rates can naturally vary as new threats come and go. Regardless, it’s still far better than we’d expect from a suite, and more importantly it didn’t falsely flag a single legitimate email.

The suite’s Parental Controls are even more impressive. This isn’t some lightweight, bare-bones product: you’re able to restrict access to programs, instant messaging (including social networks), downloading, websites and games. There are versatile options to control internet access and computer use overall (you can enforce a 15 minute break every hour, say). And extras cover everything from enforcing Safe Search in all the main search engines, to blocking the transfer of private data like addresses or phone numbers. It’s an excellent module which is easily good enough to be a stand-alone product.

The other big component here is "Application Control", the module which defines which programs can run on your PC, and what they’re allowed to do. Experts can use this to customize application permissions, perhaps stopping them altering your startup settings. Others might just use its helpful bonus tools to show you what’s happening on your PC right now: running processes, resource use, open ports, network traffic over time (today, yesterday, this month, this year). Either way, it’s yet another useful extra in this reliable, feature-packed security suite.

Once again the new features are relatively limited, but Kaspersky Internet Security 2015 excels where it matters: it's an accurate and reliable security suite which does a great job of keeping malware at bay.

One Response to Kaspersky Internet Security 2015: An accurate and reliable security suite [Review]