Forget.me now handles 'right to be forgotten' requests for Bing as well as Google 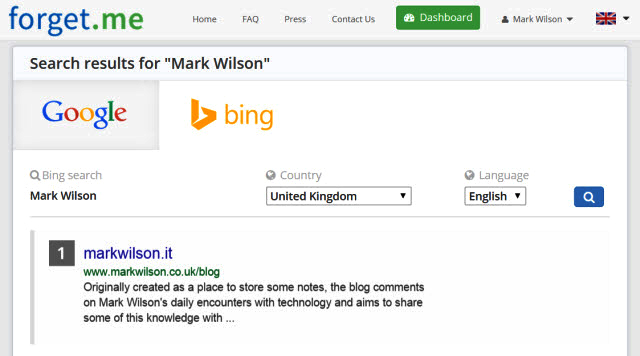 Back in May, the EU Court of Justice ruled that people have a "right to be forgotten" from search results. Google fairly quickly set up an online form to allow complainants to put forward their case for censoring their appearance in results. It didn’t take long for Microsoft to follow suit, and Bing users were soon afforded the same option.

Forget.me was one service that offered to take care of Google removal requests for people, and at the time CEO Bertrand Girin promised that "if Bing and Yahoo get their Right to be Forgotten forms in order, we’ll be able to provide you with the possibility of submitting your URL to all three search engines at the same time." For Microsoft, that day has come.

Forget.me can now be used to submit removal requests to Bing as well as Google. The service not only saves those with complaints from having to hunt down the relevant forms on Google and Bing's sites, but also eliminates the need to submit two requests -- one form can be used to submit requests to both search engines at the same time. There's no word on when support for Yahoo will be added, but the ball is very much in Yahoo's court for now.

Just how valuable the removal of links will prove to be remains to be seen. The court ruling has proved controversial, with many media outlets complaining that it amounts to little more than censorship. While the ruling does not require publishers to delete or amend any pages that contain "inadequate, irrelevant or no longer relevant" information, the onus has been place on search engines to remove links to them -- the content still exists and can still be accessed, just not via specific searches.

The "right to be forgotten" was heralded as a victory for privacy from some quarters, but the removal of search results has also been shown to be ineffective. Individuals may feel a sense of personal victory when results are removed, but sites like Hidden From Google are making a point of highlighting the pages that have been removed. With many websites drawing attention to articles that have been hidden from searchers, attempts to censor the web may actually have the reverse of the intended effect -- highlighting information that someone was trying to conceal.