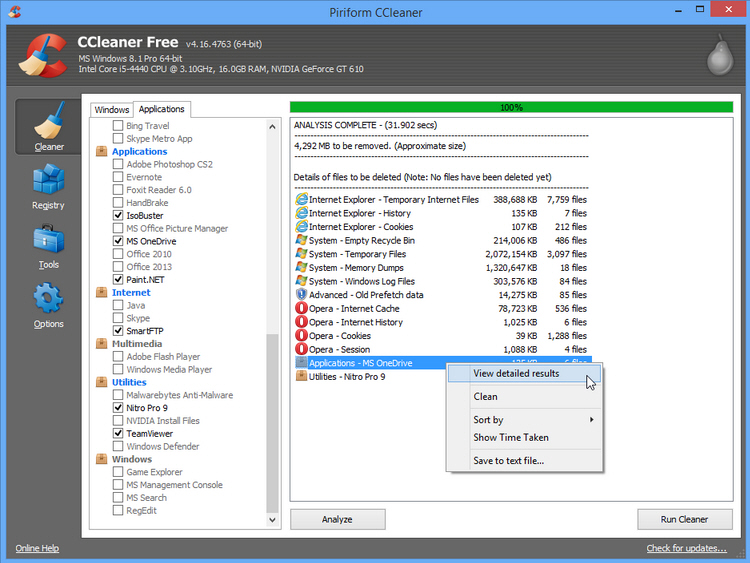 It’s that time of the month when Piriform issues its regular CCleaner update for Windows PCs, and undeterred by the recent CCleaner for Mac 1.08 release, the company has shipped CCleaner 4.16 and CCleaner Portable 4.16 right on schedule.

The new release adds support for a number of new programs, improves its Firefox and Chrome cleaning tools and adds a new Repair option to the uninstaller should it be needed.

The update opens with the promise of improved cleaning and start-up management for the latest version (36) of Chrome, plus improved browser cache cleaning in Firefox.

CCleaner’s program installer now gains a Repair option, allowing users to perform a repair install as well as remove it from their computer should problems occur. Alongside this comes the promise of an improved 64-bit build architecture for Windows 7 and 8 machines.

Version 4.16 also promises improvements to the Startup Item tool’s compatibility, but with what exactly is not specified.

Five new programs are added to CCleaner’s cleaning options: TeamViewer, Microsoft OneDrive, RealVNC 5, Tag & Rename and Tango cleaning. And as is now traditional, the update is rounded off by minor user-interface tweaks and bug fixes, none of which are specified in the program’s customary spartan release notes.

CCleaner 4.16 and CCleaner 4.16 Portable are available now as freeware downloads for PCs running Windows XP or later. A Professional version offering additional features including real-time monitoring and complete system cleaning is available for $24.95.

5 Responses to CCleaner widens cleaning to include TeamViewer and OneDrive, adds repair option