Wilson's Weekend Whine: slow connections are dividing the web -- and making me mad 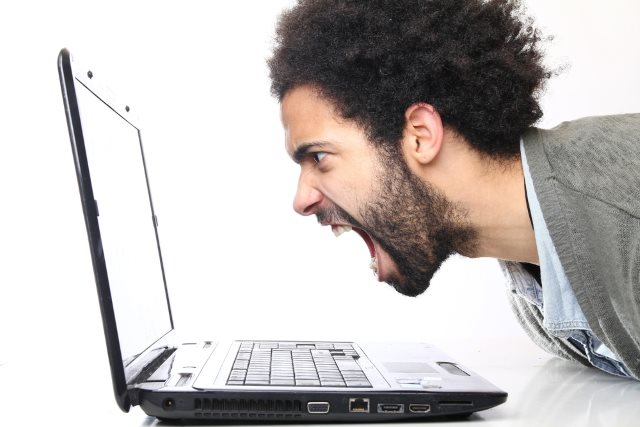 The inspiration for this weekend's whine, along with the reason for its slight delay are one and the same thing. An appallingly slow (often non-existent) internet connection. Well, actually it's a combination of things, a slow internet connection being just one of them. Most people -- myself included in the past -- don't give a second thought to living online. Web pages are there ready be accessed on demand. Movies are just waiting to stream. Facebook and Twitter posts stream by. And so on. At least that's how it should be. If you live out in the sticks, it's a very different story -- and it stops me from banging about Edward Snowden and the NSA.

Look at the headlines and you’d be forgiven for thinking that everyone in the "developed world" is working with a blisteringly fast connection. Forget cables, we just have our brains connected directly to the internet. But we don’t. Here in the UK, there is a very noticeable digital divide, and I know it's a similar story in many other parts of the world. I've been fairly lucky in the past. Moving house at the turn of the millennium happily coincided with the arrival of broadband in the area. Hooray! 4Mbps of downstream -- more than acceptable nearly 15 years ago. A house move later, and things jumped to 8Mbps.

I then spent some time in the US. This meant dealing with Verizon rather than BT, and accepting a drop in speed to 3Mbps or thereabouts. Several months later, returning to the UK, a move to Scotland was on the cards. But not just "Scotland", "middle-of-virtually-nowhere Scotland". Mobile signal was a little flaky, but a surprisingly speedy "up to 8MB" broadband connection was available. Great for everyone in the area, but essential for people like me who work from home. The next move, despite involving relocating from somewhere very rural to somewhere on the edge of decent-sized town, meant dropping back to 3Mbps. The drop wasn't too much to shoulder, but there was a noticeable increase in drop outs, unreachable websites, and general frustration. But nothing could prepare me for what was to come next.

Yet another house move, and things took a turn for the particularly rural. An area where there are fields filled with sheep and cows in every direction, clumps of trees on the horizon, and only one neighbour, sounds -- and indeed is -- idyllic, but it comes with drawbacks. Chez nous had zero mobile signal. Not a bit. But worse than this, particularly for a technology journalist working from home, is the fact that the term "broadband" here refers to a connection that is *up to* 0.5Mbps. And when my ISP says "up to" you can almost hear them laughing as they say it. In reality, it means battling with a connection that operates at 0.3Mbps on a good day. Downhill with a tail-wind.

It's hard to describe how frustrating working with such an antiquated connection is. Simple online tasks that should take seconds, spread out to take minutes or hours. It is not possible to multi-task. You want to look at two web sites? Forget loading one in a background tab because that just means that the first tab won’t load at all! Streaming video? What's that? YouTube is reduced to looking like a flickbook operated by an arthritic old man, only able to flick between pages once a minute -- and who needs to take a lie down to recover from the exertion of turning three in succession.

I'm a person not averse to swearing. In fact it's something I embrace. A good, loud, full-bodied curse is great for the soul. But I don’t think I have ever sworn so much in my life. The internet is not just slow -- it is frequently completely unusable. Literally. Take this past week for instance. There have been three days when there has been no internet connection whatsoever. Countless phone calls to my ISP resulted in line tests revealing no problems, and probing showing that we should be able to connect at the blistering speed of 0.38Mbps. There was a beautiful irony in talking to a customer service robot who insisted that everything was working as it should. I was asked on several occasions to perform a speed test on the line, which led me to report back that the speed tests were inaccessible. With three different routers.

Now, after spending virtually the whole of Sunday on the phone battling, explaining, arguing, and trying to remain calm as I was told time and time again that everything was fine, the connection seems to be back up and running -- but for how long? And when I've spent my day dealing with people who don’t understand the difference between an internal and an external IP address, I do wonder how qualified they are to help.

The reason for my terrible internet connection -- and through which I am expected to write things online -- is that not only is the Wilson-plus-partner-and-cats abode way out in the middle of the Scottish countryside, but that the internet hardware in the area is positively ancient. Serving a total of under one hundred people, the local telephone exchange is simply not able to deliver broadband of about 0.5Mbps -- minus a bit for distance, minus a bit more for contention, and a bit more for noise, and a bit more for good measure. Never mind... we don’t have long to wait until the equipment is upgraded, do we? What's that? 2017, you say? W T actual F?! (and I stand by my use of the oft-maligned interobang there).

The remote location means that my current ISP has a monopoly. They own the cables and it's up to them when the system is upgraded. Cable and fiber just aren’t going to happen. The only vaguely realistic alternative is broadband via satellite, but this has hefty setup fees and ongoing charges. Restrictively hefty.

He over-speeds and he never gets pulled over...

Heading to coffeeshops, libraries, and other public hotspots -- even just browsing the web on a phone's data connection in town -- is a revelation. Pages that refused to appear at home flash up in an instant. I realize I am far from being alone. For each person gloating over the fact they have a 100Mbps connection, there are dozens more still stuck in the dark ages of dialup speeds -- literally in many cases, although thankfully not mine. And web pages are just not created for people with slow connections. Massive images, embedded videos, fat and lazy code. All these things slow down the internet for everyone, but it's only really noticed on the really slow connections.

How many web designers *really* think about optimizing their sites for everyone. It's all too easy to assume that everyone connects to the web at 10Mbps or more, and create all-singing, all-dancing sites to take advantage of all of this bandwidth. But the reality is that many, many people do not have such connections, and that means missing out on a lot the web has to offer. Spotify, YouTube, even the likes of Imgur are all but out of bounds to me -- I just don’t have the time or patience to wait for pages to load. There are tools that can compress pages, optimize browsing and so on, but there's a whole lot more that can be done to make the internet more accessible to all.

And despite all this, I continue to live my life online. The internet is my entertainment (not my sole form, of course), my job, a hobby, my research tool, and so much more. But I feel like a second class citizen of the web. The internet is my livelihood, but I have to bend to its will rather than it to mine. That's not right.

16 Responses to Wilson's Weekend Whine: slow connections are dividing the web -- and making me mad