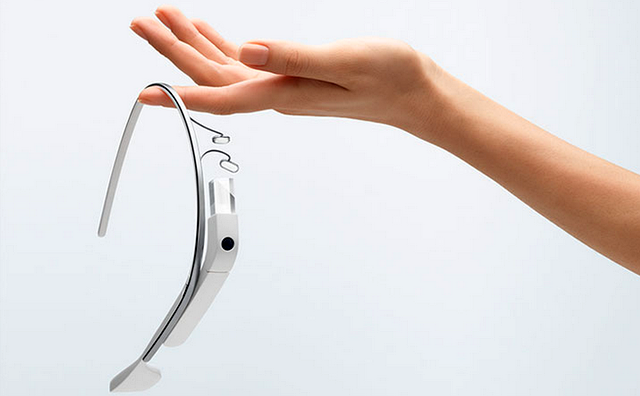 Begin a sentence with the phrase "most anticipated gadget ever" and tradition dictates the words "Google" and "Glass" must follow shortly after.

Unceremoniously launched into public consciousness from a plane hovering over Google I/O, Google Glass has been one of the hottest topics in tech since 2012. Two years on and the smart specs are still the gadget every technical guru desires; to some it's "an overwrought headband", to others it's the wearable future of modern technology.

Still, it's not all been smooth sailing. In California headlines were rocked back in April when a woman was attacked for wearing the controversial kit. No longer a geeky gimmick, Glass is equal parts wearable harbinger and political symbol. The embodiment of privacy concerns and megacorp ambition.

But strip all that back, and what do you have? Or perhaps more pertinently, what's it really like to use?

The first rule of Google Glass is you must always talk about Google Glass. You have no choice -- it is literally a computer on your face, and that's pretty conspicuous.

Even though the smart specs will attract a lot of attention, they still command an elegant design. A thin titanium frame with adjustable plastic nosepads anchors Glass to the bridge of your nose, while the right arm of the frame houses all the hardware.

Ironically, there is no actual glass here -- Google Glass has no lenses unless you buy special clip on ones separately. Instead at the front there is an inch long prism that projects the heads-up display, as well as the 5-megapixel camera.

It's incredibly futuristic, though not in an ostentatious way. The thicker right-hand frame doubles as a sort of touch-screen, allowing you to scroll through the menu system by flicking your finger along the smooth control. This is a nice touch (quite literally) given that voice control can sometimes be inaccurate, but it does mean that the frames can sit a little lopsided due to the heavy weight of all the hardware.

Get all notions of phablet-sized, 6in screens out of your head. With Glass, the panel is built into the right side of the headset. It works by beaming light into a clear prism of glass, which then rebounds out and reflects into your eye. 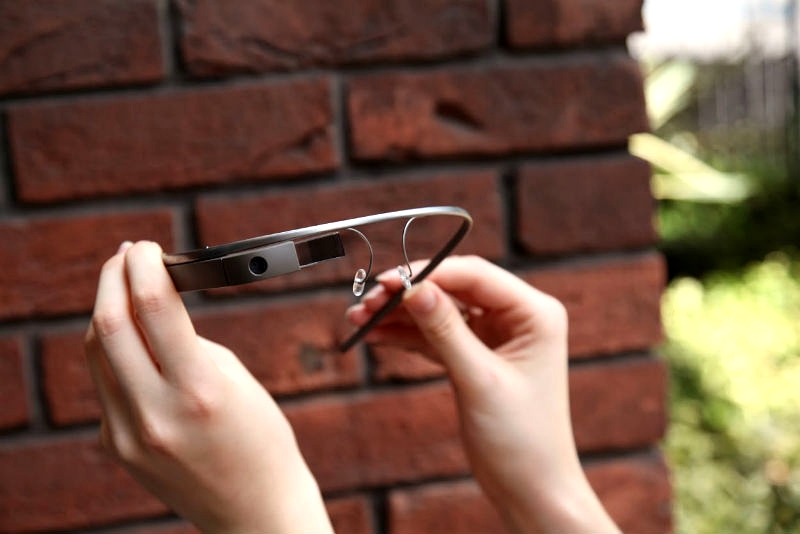 The result is a translucent, glowing image that appears to float in front of you. Google says it's like looking at a "25in HD screen from eight feet away," but if you have sight problems it can be more like a blurry mirage wobbling a mile away from your squinting eyeball. Thankfully there are prescriptive lenses available with Google Glass, but that will add a few extra digits to the Google Glass price tag.

We also take a little bit of issue with the word "HD". Google has told its developers to work with an array of 640 x 360 pixels, and while individual pixels aren't immediately apparent the level of detail is definitely limited compared to an HD display.

Colors are also slightly muted; an image will project more like a retro, passive-matrix LCD than a modern OLED display. Still, the contrast is surprisingly good considering the image is partly see-through (so you can see where you're walking.) The only time it slips up is in bright sunlight, when definition can be lost slightly.

It's key to stress though that all the viewing is done through your right eye. For quick browsing of emails that's not too bad, but if you want to surf the web or watch a video that's more than five minutes long, it becomes painful. Your optic nerve was not designed to focus intently on a very precise area for extended periods of time. Sadly.

There are three ways to capture images with Google Glass. The first is by hitting the shutter release on the top right of glass -- simply click it once to take a picture and revel in analogue tradition.

The second is simply by saying "Ok Glass, take a picture". Voice control is a key part of the Google Glass experience, which we'll delve into more in a moment.

Lastly, you can also set up a "wink" function. This means that simply by shutting your right eye, you can capture a shot in an instant. The idea is immediate memory capturing, so if Road Runner suddenly blitzes past your office you won't be caught unawares.

Trouble is, this is also the most irritating mode of the three: Glass often can't tell a blink from a wink. Get a speck of dust in your eye, and once your eyes stop streaming you'll realize you've maxed out Glass's memory with snaps of the back of your hand. We swiftly disabled the feature.

The camera itself is 5-megapixel, and while it won't capture the super-high resolution images of your smartphone, it's decent enough to snap every day moments. In bright lights outdoors you can capture some genuinely good shots, but in poor lighting conditions the photo will come out grainy. For video you can capture 10-second videos by default (in 720p), or longer videos by tapping on the side of the frames twice.

However, all this bites into the battery. Crack the case open (which we do NOT recommend) and you will find an aging TI OMAP 4430 processor, paired with 1GB of RAM and 16GB of storage. The battery size, however, is a bit more of an enigma with no official confirmation of how much juice you'll get.

Still, while we can't give you an exact size we can tell you that the life is poor. In an average day of normal use (checking emails, taking short pictures and videos and navigating to a few spots round the city) the Glass lasted only five hours before dying. When the whole point of wearable technology is to almost forget it's there and live your life around it, having to charge the Glass at regular intervals is a glaring problem.

Despite the fact that any average Joe and his tech-savvy Granny can now pick Google Glass up off a virtual shelf, the sad fact is that these are still very much prototype specs.

That's not to say that Glass is not a trail blazer. It has the potential to revolutionize the way we interact with technology, but right now it offers users very little apart from being a glaringly obvious conversation starter at parties.

While it has a slick design, excellent Google Now features and solid navigation around the interface that relies on head-tracking, it's also outrageously expensive with poor battery life and a limited number of apps.

Glass has sadly fallen victim to the real issue plaguing most wearable technology today -- the fact that you're trying to shrink the tactile tangibility of a smartphone's screen into something much smaller, in this case an inch long glass prism.

If you're an early adopter with deep pockets, by all means flog a kidney and buy the Google Glass as soon as possible. It's an incredibly fun toy, but at the moment that's all it is. For all the rest, give it another two years and wait for the second -- or even third -- generation.

The simple fact is that two years down the line from its first unveiling, it feels like Google Glass is still wrapped up in cellophane; still switched off; still folded in the box of its potential.

4 Responses to Google Glass: The pinnacle of wearable technology? [Review]