Internet Explorer 11 is much more usable in Windows Phone 8.1 Update 1 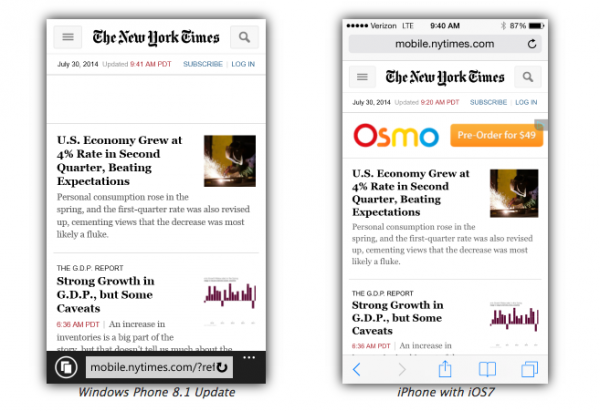 While it can never be faulted for being slow, Internet Explorer 11 for Windows Phone 8.1 still has some catching up to do with rival browsers from competing platforms, mostly regarding the way it displays some websites. My biggest gripe is that it quite often shows the desktop-optimized versions, when it should load the mobile-friendly versions instead (not the dated ones, mind you, like it does so frequently now).

Fortunately, those problems appear to be fixed in the version of Internet Explorer 11 found in Windows Phone 8.1 Update 1. "Based on your feedback, we pursued a web experience for IE users consistent with what is available on iOS and Android devices -- even where this meant we would be adding non-standard web platform features", says Microsoft. "We believe that this is a more pragmatic approach to running today's less-standardized mobile web".

Of the 500 top mobile sites that Microsoft tested, Internet Explorer 11 has been found to offer a much-improved experience on 40 percent of them. The mobile Twitter page now looks like what you see when using Safari on iPhone. Same goes for Baidu, Hawaiian Airlines, and The New York Times, according to the screenshots posted in the blog post announcing the changes.

Other sites, like Answers.com and Macy's, are now rendered much better by Internet Explorer 11, like Safari does on iPhone (the example Microsoft uses throughout as the norm; Firefox OS's browser is also used to showcase the differences). As you can see in the main photo (with screenshots of the The New York Times site, displayed in Internet Explorer 11 for Windows Phone 8.1 Update 1 and Safari for iOS 7) as well as the photo below (with screenshots of the Baidu site, displayed in the aforementioned setup), Microsoft is doing a great job at bridging the gap between its browser and its rivals. 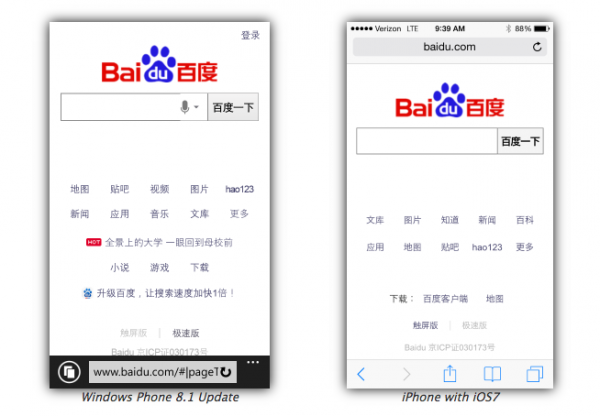 By contrast, look at how Internet Explorer 11 renders the The New York Times and Baidu sites on Windows Phone 8.1. The differences are easily noticeable, showing desktop-optimized sites in both cases.

Microsoft identifies five key issues that impact mobile sites, namely a faulty browser detection, employing just old WebKit-prefixed features instead of standards and ones for which there is no standard at all, using Internet Explorer-unsupported features and, finally, interoperability bugs and implementation differences.

These have all been addressed by Microsoft. One way the software giant has achieved this is by changing the User Agent string (Microsoft has added "like Gecko" to the code), which allows the browser to identify itself to websites. Microsoft has also added support for new features, and fixed interoperability issues.

Microsoft would rather web developers rely on standards. "It is not our goal to support all the -- WebKit -- vendor prefixed APIs. While we will continue our outreach efforts to encourage these sites to adopt standards-based mark-up, the support we've added is necessary today for the mobile web to just work", says Microsoft. "You can help here too if you see sites using non-standard code: we are collaborating with Mozilla at webcompat.com to record broken sites. These sites often cause issues across multiple browsers including Firefox and IE and it is easy for you to report problematic sites".

"If you are a web developer, run your site through the scanner tool on http://modern.ie. This tool will identify common coding problems including issues with vendor prefixes and help you fix your code", adds Microsoft.

11 Responses to Internet Explorer 11 is much more usable in Windows Phone 8.1 Update 1