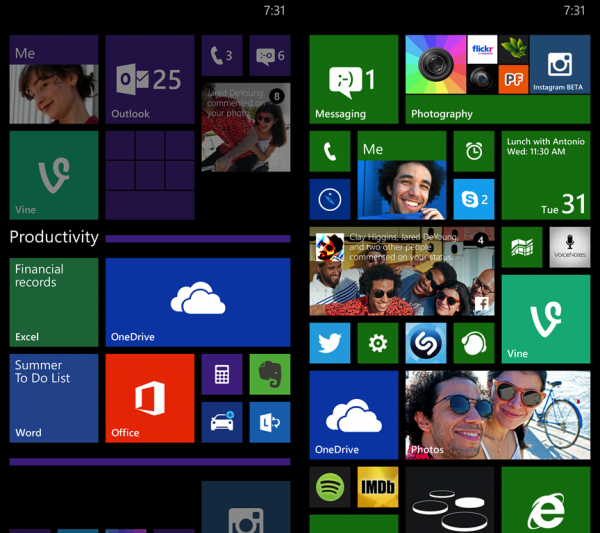 Windows Phone users who are enrolled in the Preview For Developers program can now install Windows Phone 8.1 Update 1. The major update, which was announced less than a week ago, is set to officially roll out to the masses in the comings months.

The most important user-facing changes that Windows Phone 8.1 Update 1 introduces are Live Folders, a new feature which finally enables folders on the platform, and improvements to the stock apps, privacy and security. Of course, it also makes way for Cortana's first expansion.

The personal assistant in Windows Phone 8.1 Update 1 is available as a beta to users in China (where Microsoft is calling it "Xiao Na") and United Kingdom, and as an alpha in Australia, Canada and India (there, users will have to choose between UK and US English, to interact with Cortana).

Cortana has been adapted to work in China and UK, featuring local optimizations for both markets. In China, it looks and sounds different (compared to US), while in UK it features locally-used spellings and pronunciations and a tailored personality.

On top of Live Folders, there is another new standout feature baked in Windows Phone 8.1. Called App Corner, it is designed to be used by businesses which wish to control which apps their employees will see first right after booting their Windows Phones, and, naturally, which apps they are allowed to use. App Corner is a step towards a more BYOD-friendly smartphone platform, and should drive up Windows Phone's adoption in the business segment.

You can learn more about the new features and changes in Windows Phone 8.1 by reading my post detailing the major update. As I write this post, I am installing it on my Nokia Lumia 920. The upgrade process is taking considerable time to complete (more so than I originally expected).

8 Responses to Windows Phone 8.1 Update 1 available via Preview for Developers