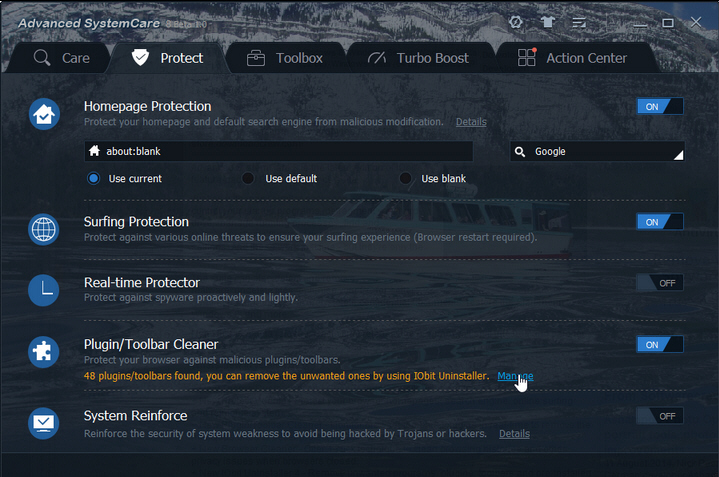 It also showcases another redesigned user interface and introduces support for themes, allowing users to customize the program with photos.

The user-interface update is described as "brand new", but will be familiar to existing Advanced SystemCare users -- it’s basically a streamlined design that also adds support for maximizing the user interface to full screen.

The new Theme customization feature, accessible by clicking the t-shirt icon on the main page -- now allows users to substitute the basic theme with a photo of their choosing. PNG, GIF, BMP and JPG images are supported. The image is then displayed in semi-transparent fashion in front of the existing skin.

A number of new tools have been added to version 8, including a brand new Protect module, which allows users to lock homepages, search engines and general surfing.

Also included is a new browser plug-in and toolbar cleaner, and a "System Reinforce" tool, which provides one-click fixes for beefing up system weak points.

Also added to version 8 is a new browser cleaning tool as well as a Software Updater component. The built-in IObit Uninstaller is now updated to version 4, which is also currently in beta. New features include support for removing Windows 8 Metro apps.

Other tools get updates: the Startup Manager now comes with a one-click optimization for startups, services and scheduled tasks, while the Privacy Sweep tool can now sweep Windows 8 apps and iTunes. The Disk Optimization tool gains support for optimizing SSD drives and supports multi-disk defragging.

The Registry fix tool gains a fix for Windows Services and comes with the promise of faster scan speeds and better stability, while the Performance Monitor has also been updated.

IObit Advanced SystemCare 8 Beta is available now as a free trial download for PCs running Windows XP or later. As its beta software, caution should be applied when using the tool.