Satellite broadband finally opens up the internet to me 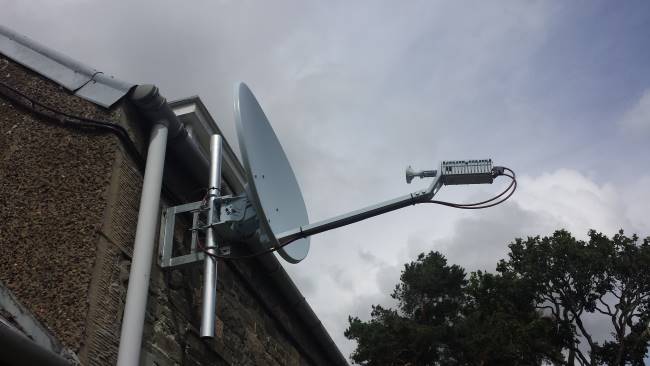 A few weeks ago I complained bitterly about my atrocious internet connection. The impact of a deathly slow and unnervingly unstable connection is hard to overstate. Tension and frustration chez Wilson reached boiling point. Nerves were frayed and tempers short. But as I sank into the bleak, hellish broadband abyss, a hand reached out to save me. The hand was extended by the suitably named Satellite Internet who took pity on me having read of my plight. A trial of satellite broadband was duly offered, and I don’t think I could have said "yes, please" faster. It's something I've considered before, but the startup costs had put me off.

Satellite Internet's service uses Astra satellites, the same ones used to deliver satellite TV to Europe. This means that a smaller dish than you might expect is needed. Forget the monster installations you may have seen in people's gardens in years gone by, these days the dishes have shrunk to something that's just about the same size as those used for TV broadcasts. Installation was delayed due to my trip to the Isle of Skye (which, incidentally, has blisteringly fast internet considering it's a tiny island connected to the mainland with a small bridge), but this morning two installation engineers arrived at 8:00, having travelled more than two hours to reach me.

Within about an hour, we were up and running. Chunky lengths of coax wound their way into the house and a gigantic satellite modem nestled under the stairs. Within moments I hit the first stumbling block. The installers left, telling me that everything was up and running and demonstrated the working connection on their own laptop. But after they'd gone, my own laptops wouldn’t connect... largely because there was no wireless network visible. Ah... need to plug in the router (not supplied). After a couple of false starts, a connection! Web pages flew in, I felt like a bird uncaged. Any fears I had about satellite being, well, a bit rubbish, evaporated.

There is a slight delay between clicking a link and a page loading, but it is only very slight, and once the transfer is underway it's all systems go. A couple of test downloads finished very quickly, and a speed test revealed that I was enjoying 12.55Mbps download speed. The speeds are nothing compared to fiber connections, but it's a huge jump for me. The connection is supposed to be up to 20Mbps, and I'm not sure if there'll be an increase, but it's entirely possible that previously suffocated apps and devices started to suck up the available bandwidth like oxygen.

This is something I'm going to have to keep a close eye on. Speeds are great, but there are limitations. The package I'm on at the moment costs £22.95 per month (around $38) and includes 10GB of data at up to 20Mbps. Once this limit is reached, it's still possible to use the internet, just at a rather reduced speed of 256kbps -- time to curb those downloads. It is possible to buy a bolt-on called FreeZone which opens up more options. For £7 extra per month (around $11) the package adds unlimited overnight traffic that doesn’t count towards the overall monthly limit -- time to start scheduling!

Is it all good news? Not entirely. Living in such as remote part of the world means that it is not only my telephone-based broadband that suffers -- mobile signal is also something of a rarity. There are literally no networks that offer a signal at my home address, and this meant that there was really no reason for me to move away from Orange/EE. After much tooing and froing several months ago, Orange/EE sent me a signal booster to plug into my router. It's a 3G box that essentially allows for text messages and phone calls to be made through an internet connection. The recommended minimum connection speed for using the booster is supposed to be 2Mb. As I have mentioned before, my broadband connection was crippled at 0.3Mbps on a good day. But the box worked. Sort of.

When I say it worked, what I really mean is that the box would kick out a signal around fifty percent of the time, frequently losing sync and falling over. When connected, the laughable internet speed meant that -- of course -- it was impossible to make or receive phone calls; the phone would ring so I'd know a call was coming, but the audio had a distinctly underwater feel at best. Text messages worked fine, so it was worth keeping the box plugged in just for that. With satellite up and running, I was keen to see if I would, at long last, be able to make voice calls on my mobile at home.

Just as gamers bemoan the latency of satellite broadband, so the signal box decided to throw a hissy fit. A quick call to customer service revealed that the relatively high latency of the connection meant that the signal booster would not be able to sync with the server and would therefore be unusable. Drat and darn! Still... it seems like a small price to pay for an internet connection that is not only (in early tests, at least) rock solid stable, but also fast.

Of course, it's very early days. I'm just a few hours into using the connection, but I'm already sold. The internet is enjoyable rather than a pain, pleasurable rather than a chore. I'll write a little more about my experiences in the coming weeks, but based on my early impressions -- assuming you can stomach the initial set up costs, and don’t mind monitoring your web usage a little -- I'm sold.