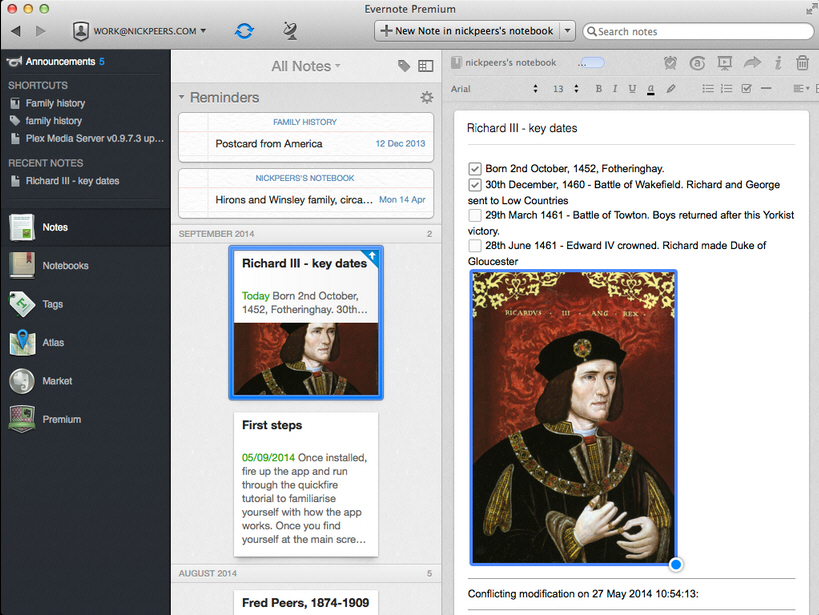 Evernote Corporation has rolled out Evernote for Mac 5.6, a major update of its cloud-based note-taking client for Mac users. Version 5.6 comes with a rebuilt -- and improved -- note editor, as well as faster sync performance.

The update also comes with the promise of more relevant searches, integration with Spotlight and has been optimized to both launch faster and reduce its energy demands.

The headline feature is the improved note editor, which has been rebuilt alongside "every underlying aspect of the app" according to Evernote, as part of a concentrated approach to improving speed, sync and editing.

The first major improvement is the ability to now resize images within a note without affecting the actual image size. Users can click and use the drag handles to shrink the image to a more comfortable view. To access the original, full-size image, users can simply drag it out of the note.

The note editor also comes with a brand new table editor for spreadsheet-like notes, which offers options for deleting rows and columns, changing colors and resizing cells by click and drag. Notes also improve their display of checkboxes by making them larger and more clearly visible.

The update also comes with the promise of vastly improved sync performance, particularly for those with large numbers of shared notebooks as well as Evernote Business customers.

Other changes involve the search tool -- results are now displayed by relevance rather than the date the note was created, although users retain the option of switching the "classic" search ordering if desired.

In addition, version 5.6 now integrates with Spotlight to allow users the option of searching through their Evernote account via the [Cmd] + [Space] shortcut. Finally, Note View gains a new notebook selector that remembers the most recently used notebooks.

2 Responses to Evernote for Mac 5.6 improves note editor and search tools, speeds up sync and startup