iPhone 6: Lovely, but not groundbreaking [Review] 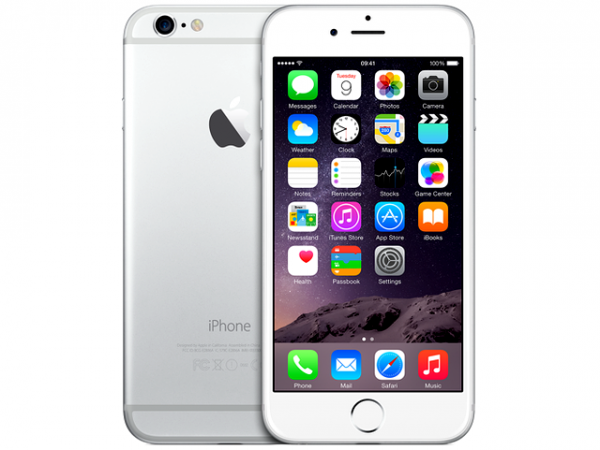 This time, while there are some differences between the iPhone 6 and the iPhone 6 Plus, apart from screen size they are subtle ones, and your choice is primarily about size -- do you want a 4.7-inch screen or a 5.5-inch one? This review is of the 4.7-inch iPhone 6, kindly provided by Three -- our review of the iPhone 6 Plus will follow.

You don't have to be an iPhone fan to consider the iPhone 6 a thing of beauty. Its nearest comparator in design terms is probably the super HTC One M8. My silver review sample looks simply stunning. The metal back might attract scratches over time, but it is tough. The back wraps around the sides and bonds to the white glass front really well. The curved and rounded corners look much more classy than those of the iPhone 5s, and the same can be said of the four edges, which are also curved rather than flat.

There's almost no bezel down the long edges so that the 4.7-inch screen fits into a chassis just 67mm wide. Add that to the 6.9mm thickness and the handset sits neatly in smaller hands. So thin, in fact, is this phone that the back camera lens has to protrude slightly from the base. And it is remarkably light too, at just 129 grams. The top and bottom bezels are the let-down here -- they're quite tall and while they are not odd by iPhone standards they do look a bit out of place.

Buttons and connectors are found on three of the four edges -- the top one is completely clear. The bottom is the busiest -- this contains the headset and Lightning connectors and speaker grille. On the left are volume buttons and a small button for sending the handset into silent mode. On the right is the power button.

The screen is superbly clear and sharp -- it is top notch in that respect and difficult to fault. While upsizing the screen to 4.7-inch might seem cautious on Apple's part it is quite a step up from the 4-inch display of the iPhone 5s. That handset's 1,136 x 640 pixels have been upped here to 1,334 x 750. Apple is calling the display Retina HD, but note that the greater number of pixels is effectively cancelled out by the larger screen size. Both the iPhone 5s and iPhone 6 have a 326ppi pixel density in terms of actual sharpness.

The larger screen means there's room for more information with six rows of app icons rather than five. You can switch from this "Standard" display to "Zoomed" display which, like the iPhone 5s, offers five rows of app icons and correspondingly larger graphics and text. There's a point to note about the Standard resolution -- until your favourite apps get updated to support it, they'll drop back to Zoomed. Popular apps will probably have done this by the time you read this review, though.

For those who find the screen too large to manage one-handed, a new iOS 8 feature called "Reachability" is, quite literally, on tap. Double tap the home button and the top of the screen moves about half way down so you can reach high up buttons easily.

The home button incorporates Apple's now standard Touch ID fingerprint recognition. If you want to use it there's the initial setup to go through, involving putting your finger on the button multiple times -- about 20 in my case -- so that it can read and record the print not only in the centre of your pad but around the edges too. I found the Touch ID system very reliable. The fact that you can put your thumb onto the home button at an angle makes using it one-handed effective.

There's no microSD card expansion here, so you need to choose the memory configuration that works for you. Check operator deals, of course, but the SIM-free prices are £539 for the 16GB model, the 64GB model costs £619, and the 128GB model is £699. My 16GB iPhone 6 from Three had 11.6GB free out of the box. 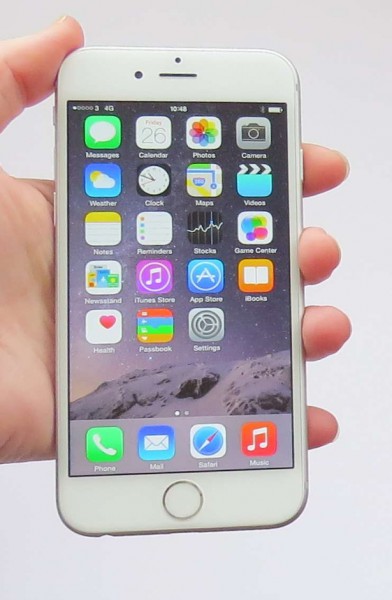 The iPhone 6 is more powerful than its predecessors with a new A8 processor and a new M8 motion coprocessor, along with the Metal development tool which is designed to help software developers make the most of the main and graphics processors. Future games should be more immersive as a result.

The iPhone 6 has a barometer built in to sit alongside the accelerometer, compass and gyroscope. Why? The barometer uses changes in air pressure to work out elevation. Apple wants to get into the health and fitness arena like everyone else, and there's a Health app that comes as part of iOS 8 and is designed as an integrator for information from different apps.

The two cameras are efficient -- and while the back camera remains an 8 megapixel shooter as it was in the iPhone 5s, and the front camera is the same 1.2 megapixels, there are a couple of additions such as time lapse and slow motion video capture to ring the changes. There's also a feature Apple calls Focus Pixels which improves autofocus speed. Certainly during testing, tapping the screen to set the focus point had very quick results.

HDR works well too and the handset will save both the original and HDR versions of photos so you can see the difference. Image stabilization is digital -- iPhone 6 Plus owners get optical image stabilization which produces better images. Still, I was quite happy with the camera's results. There's no camera launch button but you can get to the camera from the lock screen by sweeping its icon. I do worry that the lens, jutting out as it does from the base of the phone (see the above image), might be prone to scratching.

This is, of course, a 4G handset, and the full gamut of Wi-Fi is supported, including 802.11 ac which you don't always see on a handset. NFC is here too, but it's a mixed blessing as it's only usable in the US for Apple Pay, not for pairing devices.

During testing I found the biggest annoyance with the iPhone 6 to be the battery life. This seems below average, with anyone apart from a light user probably looking at having to boost the battery every day. Apple probably compromised here to achieve a thin chassis, and this might not have been the cleverest move.

The iPhone 6 is a lovely handset. Beautifully crafted in terms of hardware design, with fingerprint recognition that just works, a great screen and efficient processor. iOS 8 adds lots of tweaks while keeping the familiar look and feel intact. It has to be said that there's nothing really ground-breaking here, though. I'd like longer battery life too, but it seems Apple has sacrificed battery longevity in favour of a thin chassis.

23 Responses to iPhone 6: Lovely, but not groundbreaking [Review]