Ginni comes to her senses, but too late for IBM? 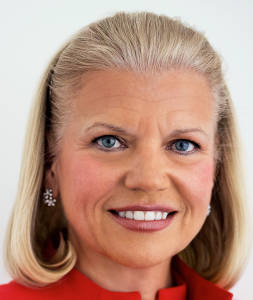 This week, of all weeks, with IBM seemingly melting-down, you’d think I’d be writing about it and I have been, just not here. You can read two columns on IBM I published over at forbes.com, here and here. They are first day and second day analyses of IBM’s earnings announcement and sale of its chip division to GlobalFoundries. I could publish them here three days from now but by then nobody will care so instead I’ll just give you the links.

One thing I can do here is consider the way IBM CEO Ginni Rometty is spinning this story. She was all over the news on Monday repudiating the 2015 earnings target set by her predecessor Sam Palmisano and more or less claiming to be a victim -- along with the rest of IBM -- of Sam’s bad management. Well she isn’t a victim. Ginni was an active participant in developing the Death March 2015 strategy. And as CEO -- now CEO and chairman -- it’s laughable to contend, as Ginni apparently does, that she has been somehow bound by Sam’s bad plan.

When you get the big job the whole idea is that you start calling your own shots.

Ginni Rometty is in trouble along with the rest of IBM. She’s leading a failed strategy laid out in gruesome detail in my IBM book (link -- buy a bunch, please) and appears to have little or no idea what to do next. Having finally repudiated that crazy 2015 earnings target, the market will allow Ginni to reinvest some of that money in trying to save IBM’s core businesses. But it isn’t at all clear she knows where to invest or even why. If that’s true, Ginni Rometty won’t survive much longer.

A bold turnaround plan is coming from Ginni, we’re told. And I’ll be coming up with my own plan, too, which will be interesting to compare and contrast. Look for that here at the end of the week.

Some readers see this as pointless. They don’t care about IBM and don’t want to be bothered reading about it. Well I’m sorry, but I have a sentimental connection with the company. And that’s not to mention all the IBM customers, retirees, and current employees who wonder what the heck is actually going on?

As Churchill said of the USSR, IBM has been a riddle wrapped in a mystery inside an enigma. But maybe not for much longer.