Rare Apple-1 sold by Steve Jobs is going to auction 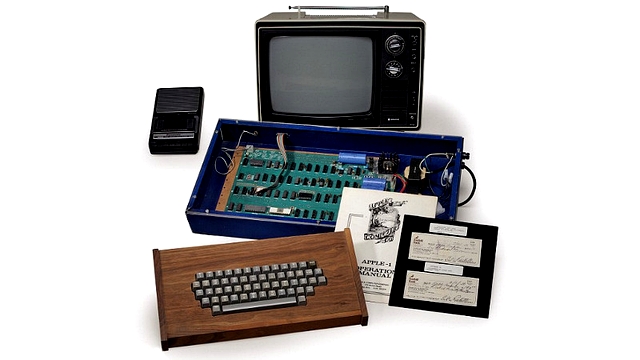 A working Apple-1 computer, sold by Steve Jobs out of his parents' garage in 1976, is to be auctioned in December, with estimates suggesting it will sell for hundreds of thousands of dollars.

Earlier this week, Christie's claimed that the machine could reach more than half a million dollars, with an auction last month seeing another Apple-1 device sell for $905,000.

The Ricketts Apple-1, named after its original owner Charles Ricketts, is fully operational, having been tested by expert Corey Cohen last month.

The computer is accompanied by the canceled check from the original garage purchase on 27 July, 1976 made out to Mr Ricketts for $600. The device is the only known Apple-1 currently in existence that was sold directly from Jobs' family home.

Christie's Andrew McVinish said that the Apple-1 is a landmark device for technology fans.

"When you see a child playing with an iPad or iPhone, not too many people know that it all started with the Apple-1," he said. "So to be able to own a machine that started the digital revolution is a very powerful attraction".

The device is currently owned by Robert Luther, a collector who purchased the computer from a police auction in 2004.

The Apple-1 is extremely rare, with less than 50 original models believed to have survived and only six known to be in working condition. The computer was created by Apple founders Steve Jobs and Steve Wozniak in 1976 and priced at $666.66, reportedly due to Wozniak's preference for repeating digits.

The Apple-2 was introduced in April 1977 and included several expansion slots, a plastic case and an integrated keyboard. The original Apple-1 was discontinued in October the same year, meaning only an estimated 200 were ever produced.