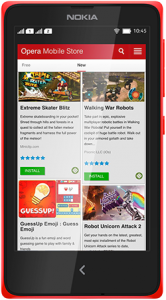 Microsoft purchased Nokia, in part, earlier this year and has now begun the slow process of making it their own. New phones are being rebranded, which is not particularly surprising. Though, parterning with Opera (yes, the browser maker) is bit of a shock.

However, today the Norwegian company announced a deal with the software giant to begin powering the app store on certain models of handsets.

"Beginning in the first quarter of 2015, people who access Nokia Store from Series 40, Series 60, Symbian, Asha and Nokia X devices will be automatically redirected to Opera Mobile Store, where they will be offered the opportunity to become customers of Opera Mobile Store and have access to tens of thousands of apps for their Nokia phones", The Scandanvian firm announces.

This transition will not happen over night, but Opera hopes to have it completed by the first half of 2015. At that point the Nokia Store will close.

“We continue to sell and support classic Nokia devices, which remain popular in many parts of the world,” says Rich Bernardo, Vice President of Phones at Microsoft. “We’re delighted to partner with Opera Software and continue to provide a reliable app store experience for consumers and developers alike".

This may come as a surprise to some customers, but Opera has long been more than just a browser maker. The company powers a number of smart TVs on today's market, as well.